Can you believe #Croydon Labour on libraries?

A press release was issued today and kindly forwarded to the Campaign group as it had not shared directly with us.

This press release will anger people further.  We are the campaign group in Croydon and no one has heard what we have to say so it is unbelievable that the press release is entitled "Labour Listens to Library Campaigners"

Here is the contents of the press release in its entirely.

"Labour councillors have forced an Emergency meeting on Croydon Council for this Monday to defend all of Croydon's libraries; fighting Tory plans to privatise our valued libraries and their staff. The Tories plans to sell our libraries will cost council tax payers in Croydon more money and it will rip the heart out of the libraries vital role in our community. These are not my words but those of library users and campaigners in Croydon.”

"The Upper Norwood Library Trust is a model that the incoming Labour council of 2014 is determined to see rolled out across to other libraries in Croydon. It will give the community a real say in how our libraries are run and what services are provided there."


Croydon Labour have not forced a meeting.  This is procedure.

Croydon Conservatives do not plan to " sell our libraries".

If Croydon Labour insist on ignoring the views of residents they will have little chance of becoming "the incoming Labour Council of 2014" as no one will trust them. At least the Conservatives kept up the pretence of consulting. It was a totally flawed consultation and ignoring the views of residents but at least they went through the motions.  But Labour, who promised a public meeting that never materialised, are now foisting a plan, built of political dogma, without any engagement with the public.

Where did this come from? Does anyone know?

Is there any party in Croydon likely to actually represent the views and wishes of Croydon residents?

If there are any residents or library campaigners who are in contact with Labour and feeding in these views please do get in touch as we do not know of you and would like to understand where this has come from.

We doubt very much they exist. 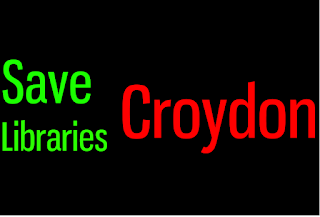 Posted by Save Croydon Libraries at 18:18