Having visited Croydon Central Library three weeks ago with a fellow Croydon library campaigner and leaving truly shocked by what we saw, I visited again the following week with an experienced library worker, Alan Wylie, of Stop the privatisation of Public Libraries to take another look, and made a repeat visit last week.

On the first visit things were truly dire.

On the revisits some hasty changes have taken place, but not sufficient to cover up the mess. Some things were the same or worse.

The most striking difference last week was the number of staff present, far outnumbering anything I'd seen before. It is assumed that after the letter in the Croydon Guardian, and the expanded version of letter posted on the Croydon Guardian website, as well as the tweets and comments about the situation prompted Carillion into damage-limitation overdrive.

But on returning last week, numbers of staff had dwindled again.

It's hard to describe the mess we found on all three occasions, and I bet some would just not believe what we saw. Take a look and judge for yourself.

You are NOT welcome to Croydon Central Library 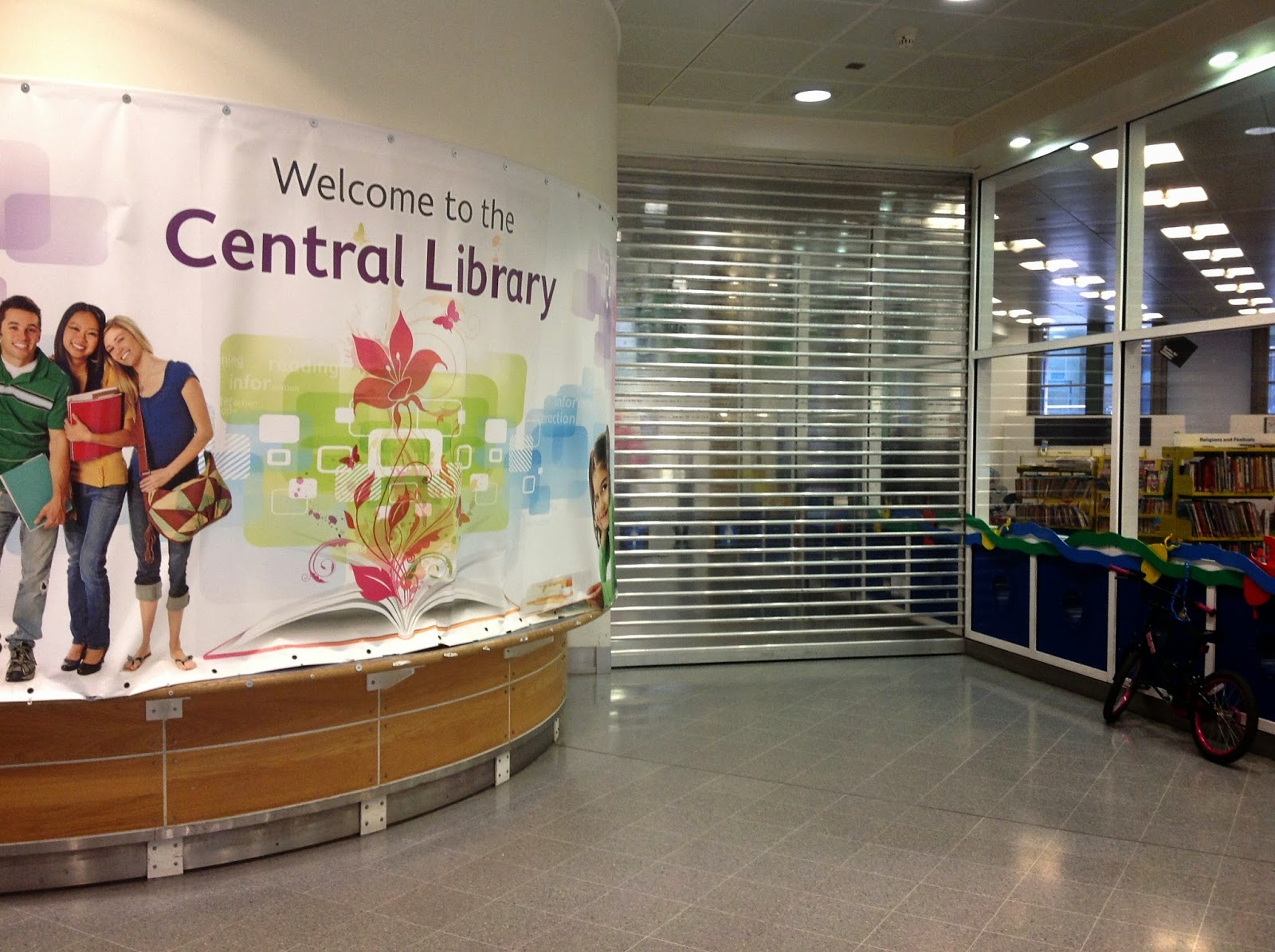 Shutter down, and has been for at least three months, according to library users. 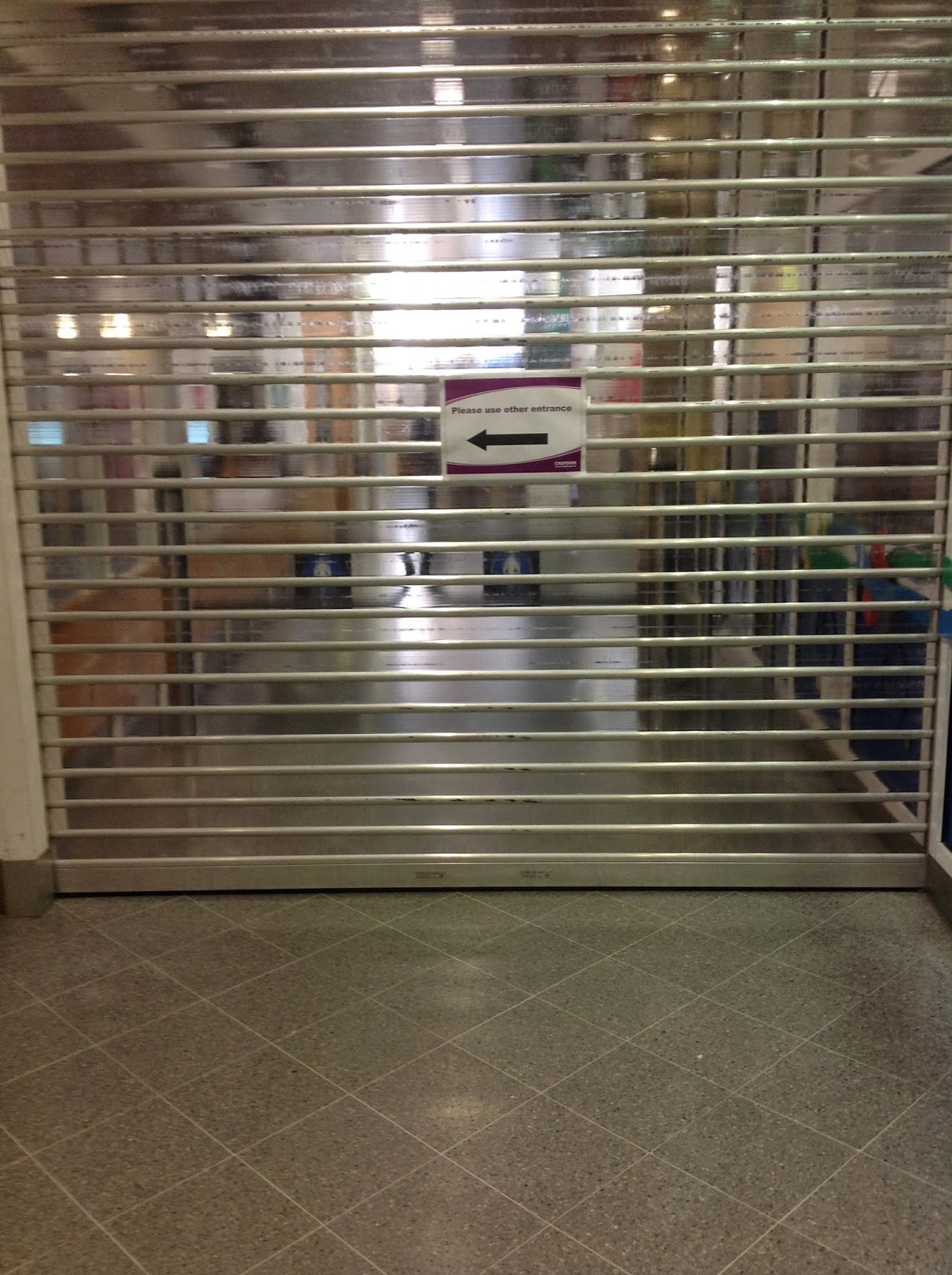 A week on..... 'Please use the other entrance' sign now displayed.  Still there last week and no move to get it opened.

That "other entrance" referred to is what locals know as "the exit"! I now know that I've turned away from the library on several occasions in the past few month's thinking it had already closed. How many others have been affected? 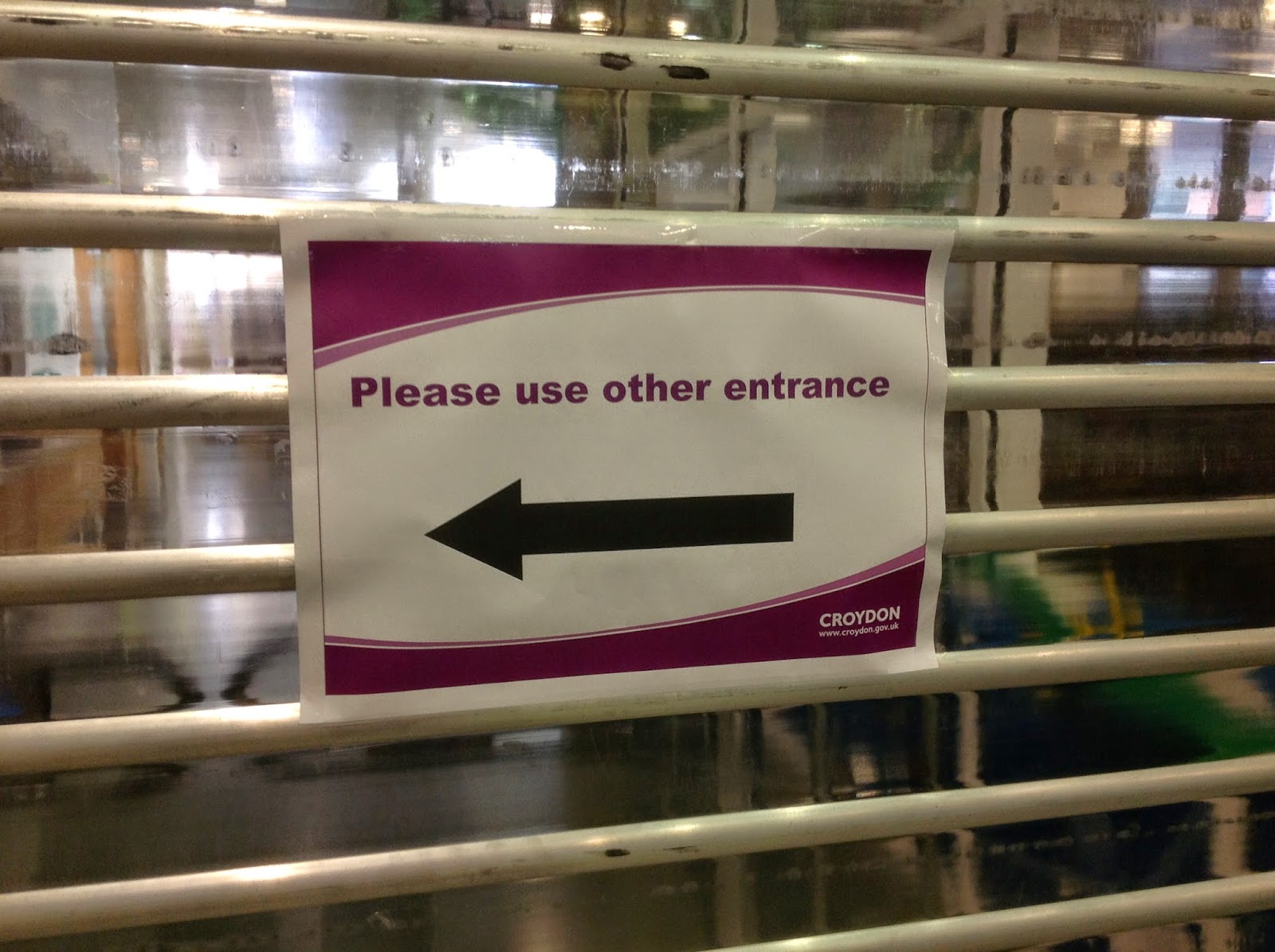 The lighting is dim on all floors. I was struck by the cruel irony of library users, huddled by windows on shabby and sparse seating, seeking natural light in order to read, and in so doing, looking straight out on the shiny new council HQ opposite, which we are told was built at nil cost - thanks to Laing, and which was furnished at a cost of a mere £3.1 mill.

There is money in Croydon.

It seems it's just a case of priorities.

And, perhaps, what your builder mates want to fund....? 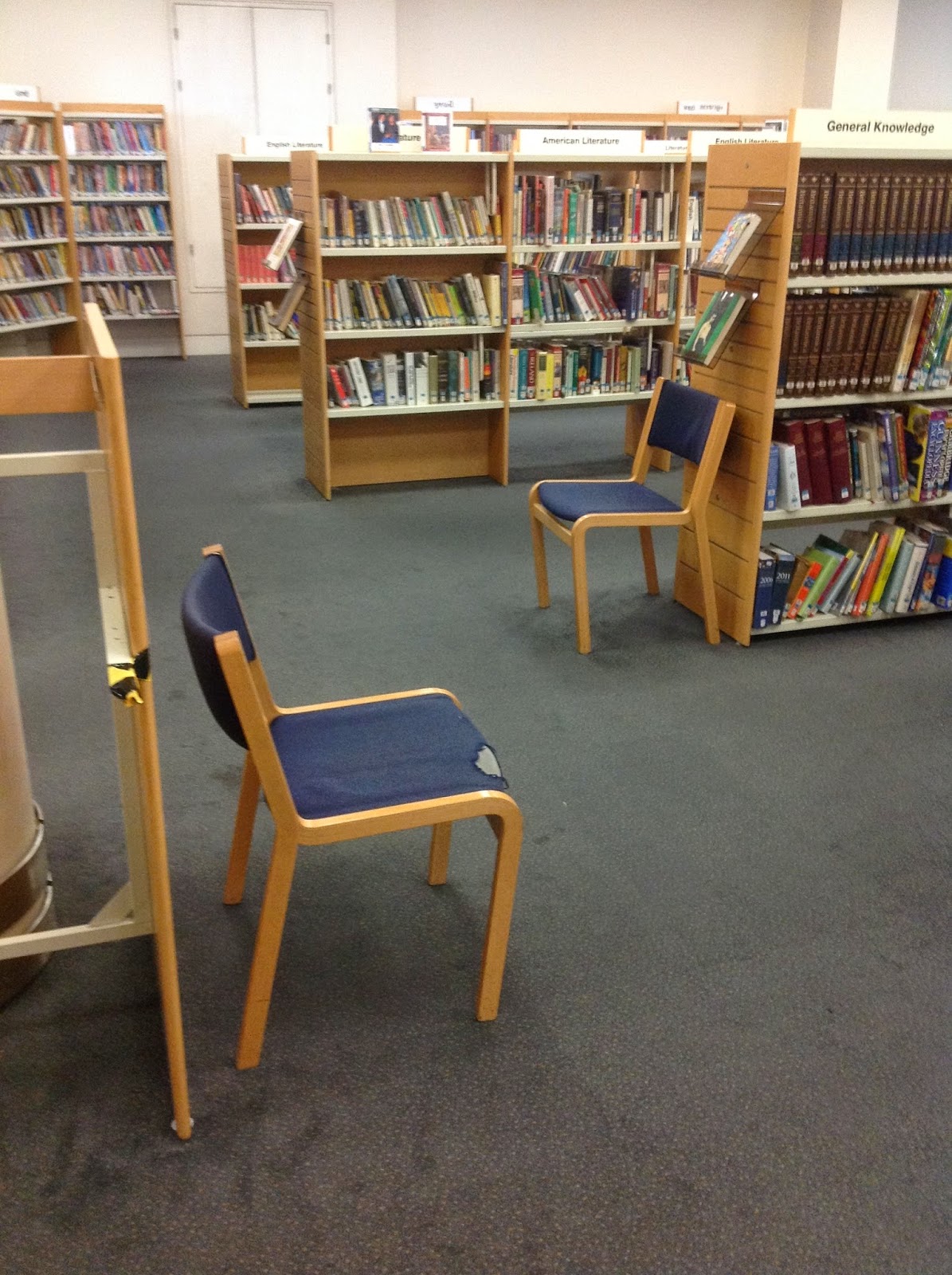 Some of the seating was in a poor state and, at times, oddly placed.

Ripped seat cushion by a partly dismantled shelving unit, complete with metal shelving protruding beyond wooden side of unit.

This was an improvement on the previous week though, when this metal jutting out at child eye level was not even masked up. See below.

Another chair placed below low level book displays, making it impossible to use as a seat.  There were notices everywhere saying that seats should not be moved. 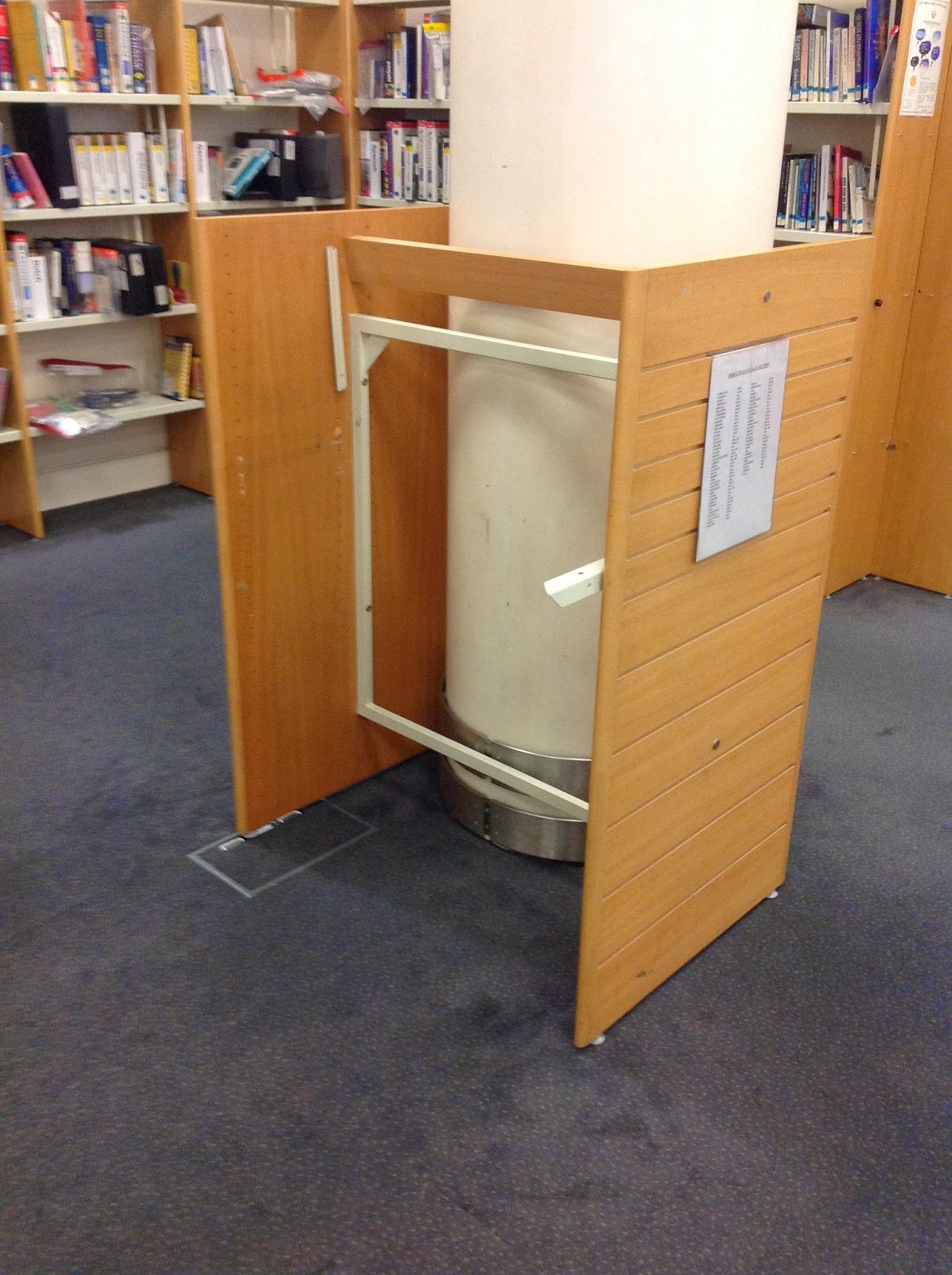 There were signs everywhere, advising of the systems in place, not to move chairs and tables, where to go when stations on different floors were unstaffed and that staff were no longer able to help on matters such as booking PCs.  There was odd signage too, referring to not plugging in lap tops at points where no sockets existed. 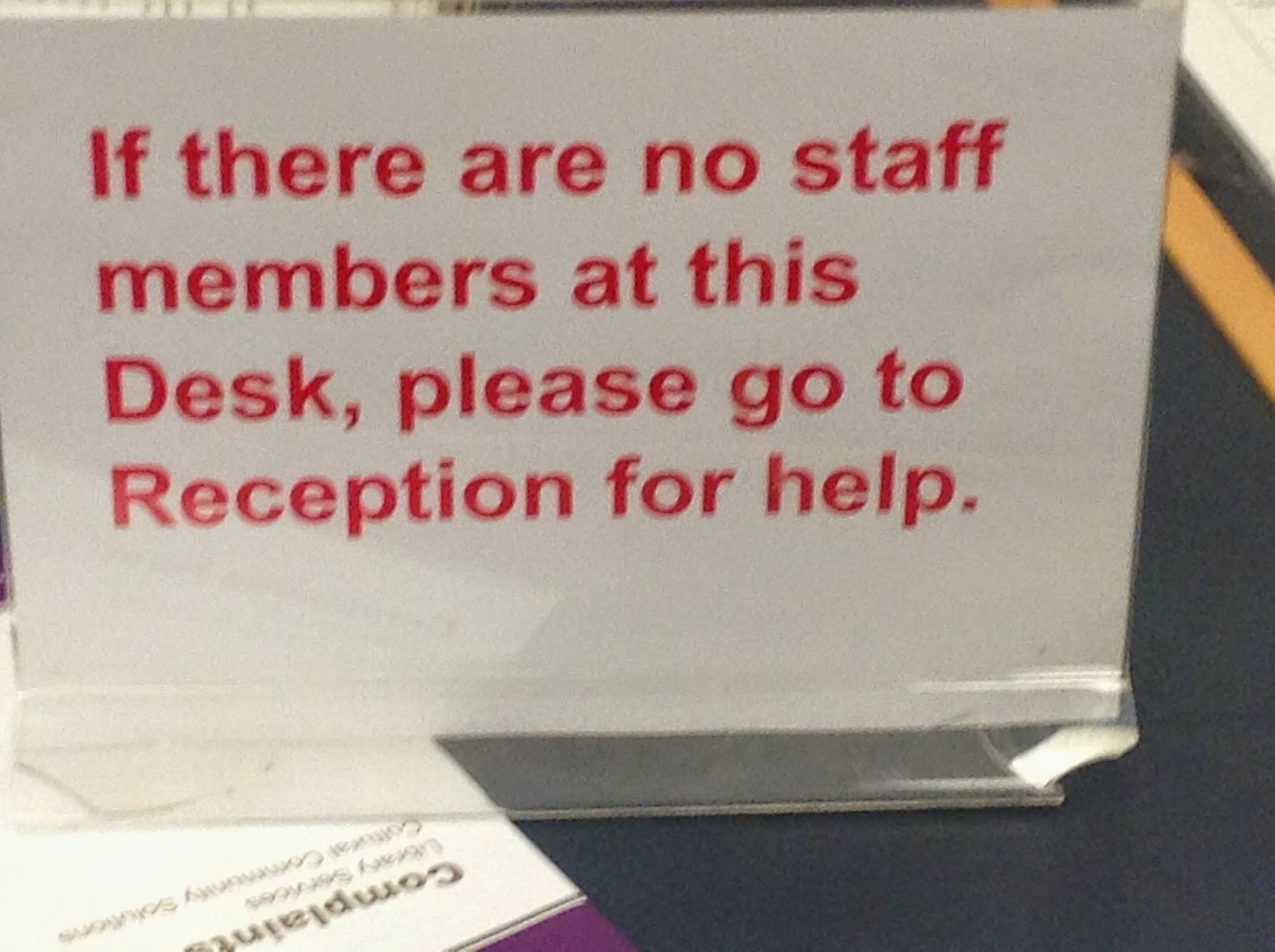 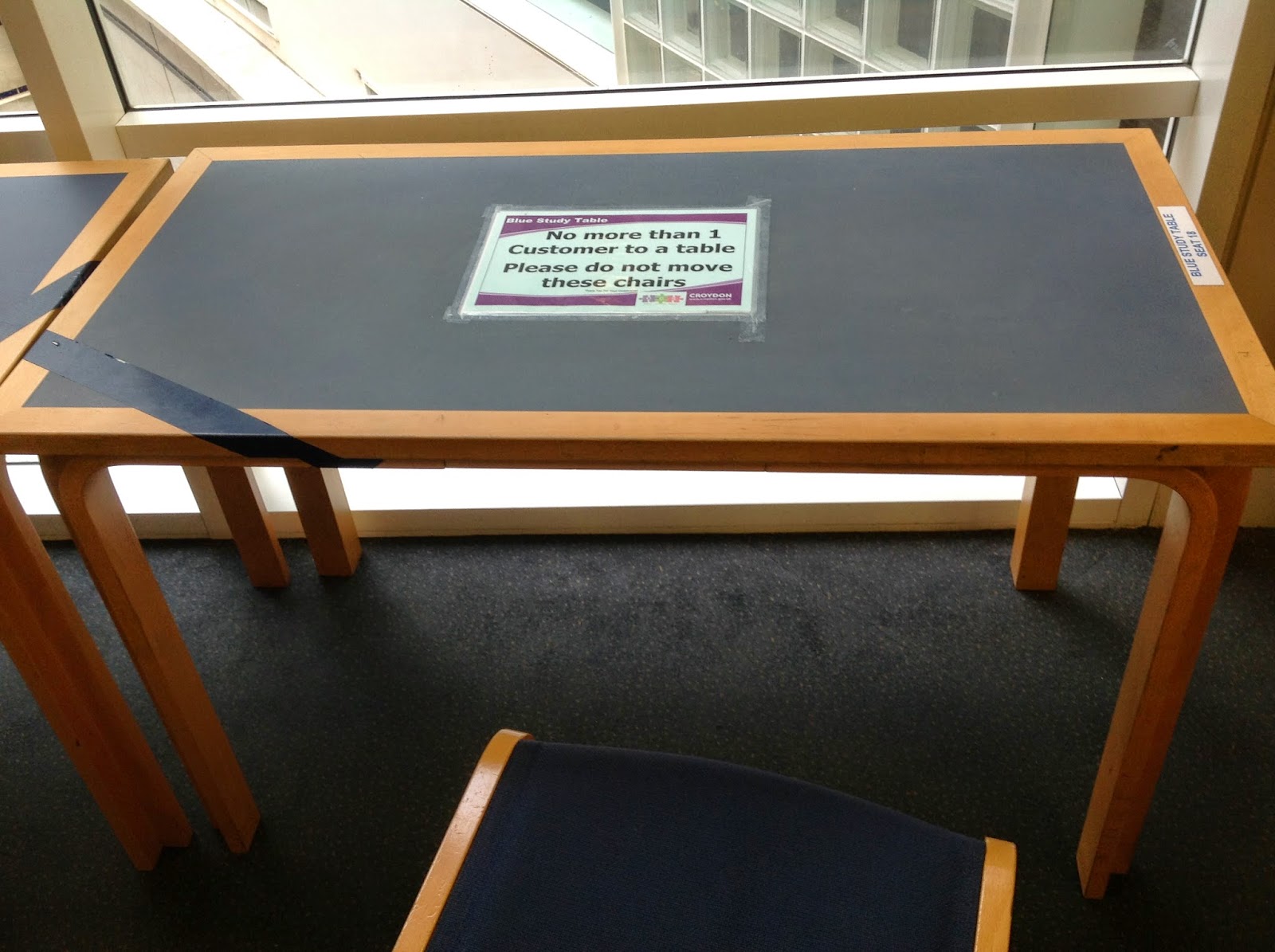 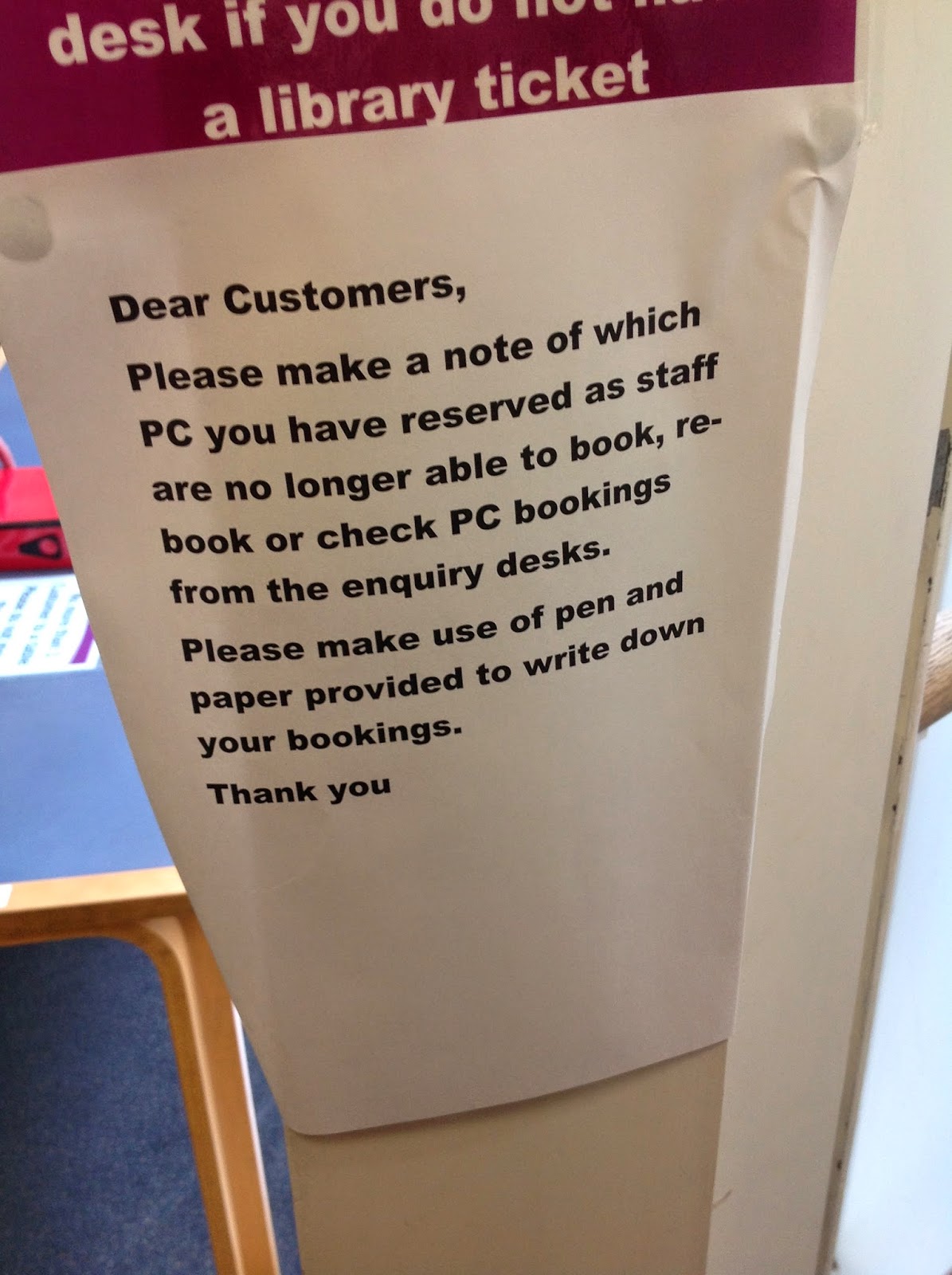 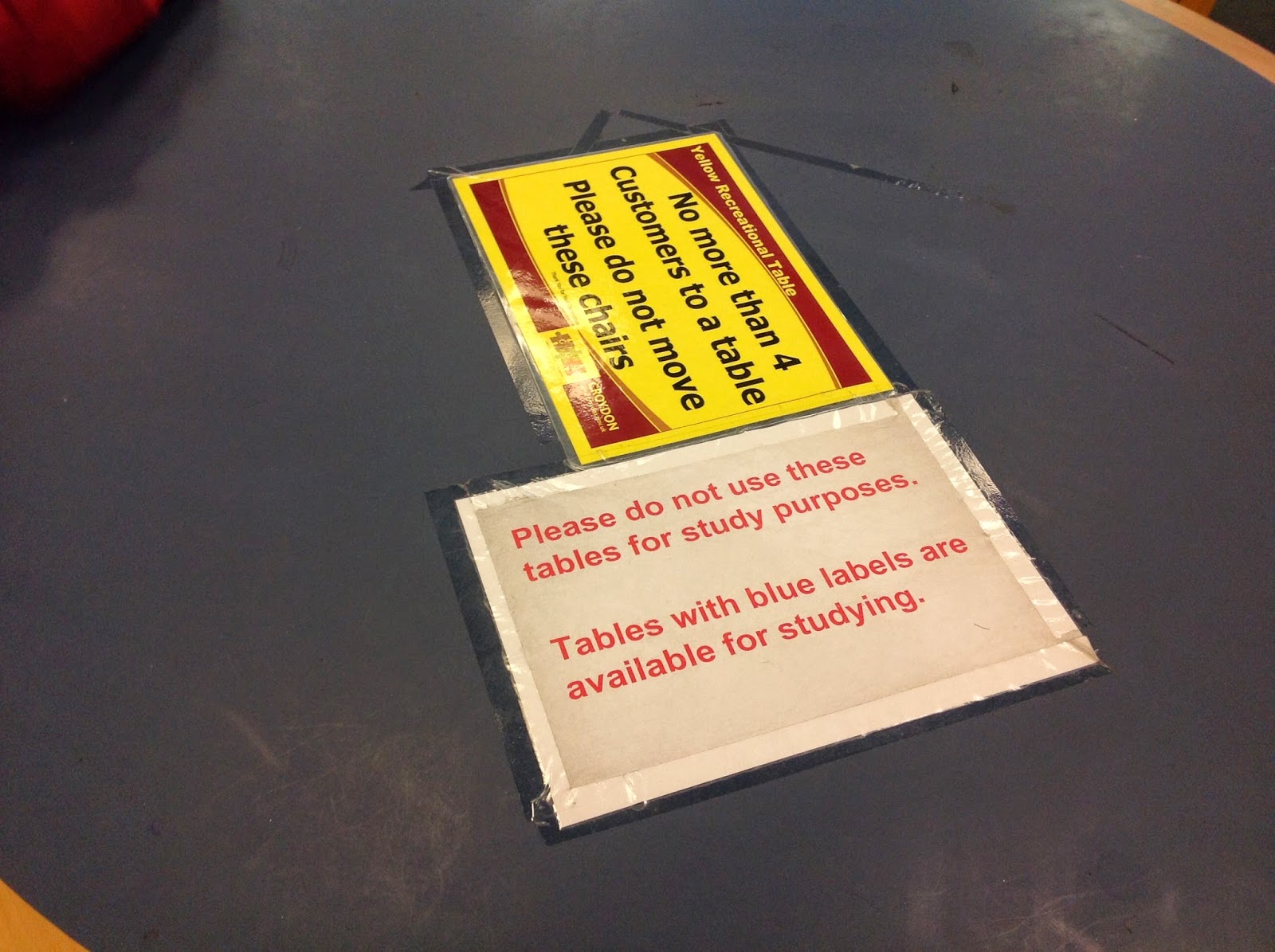 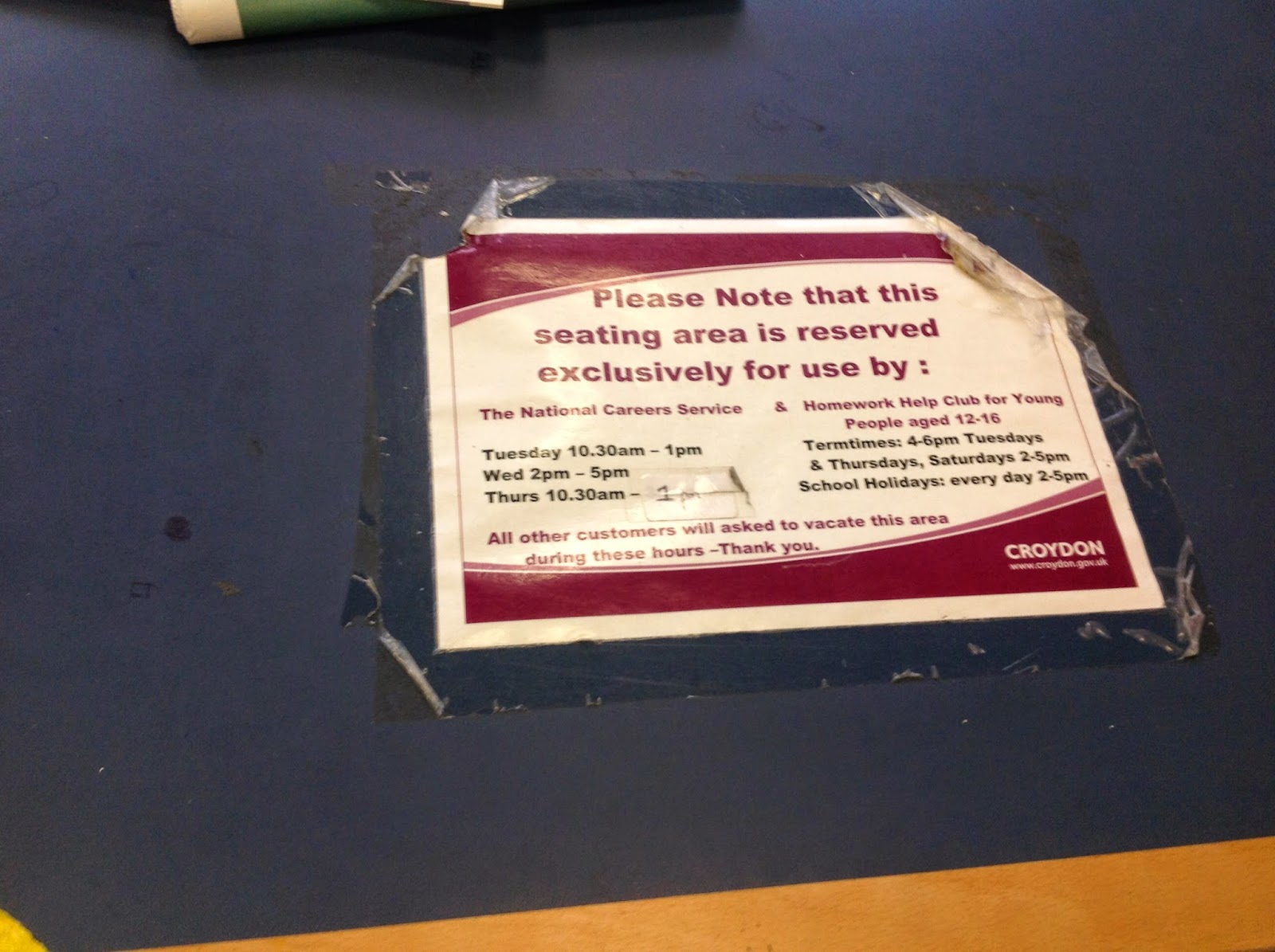 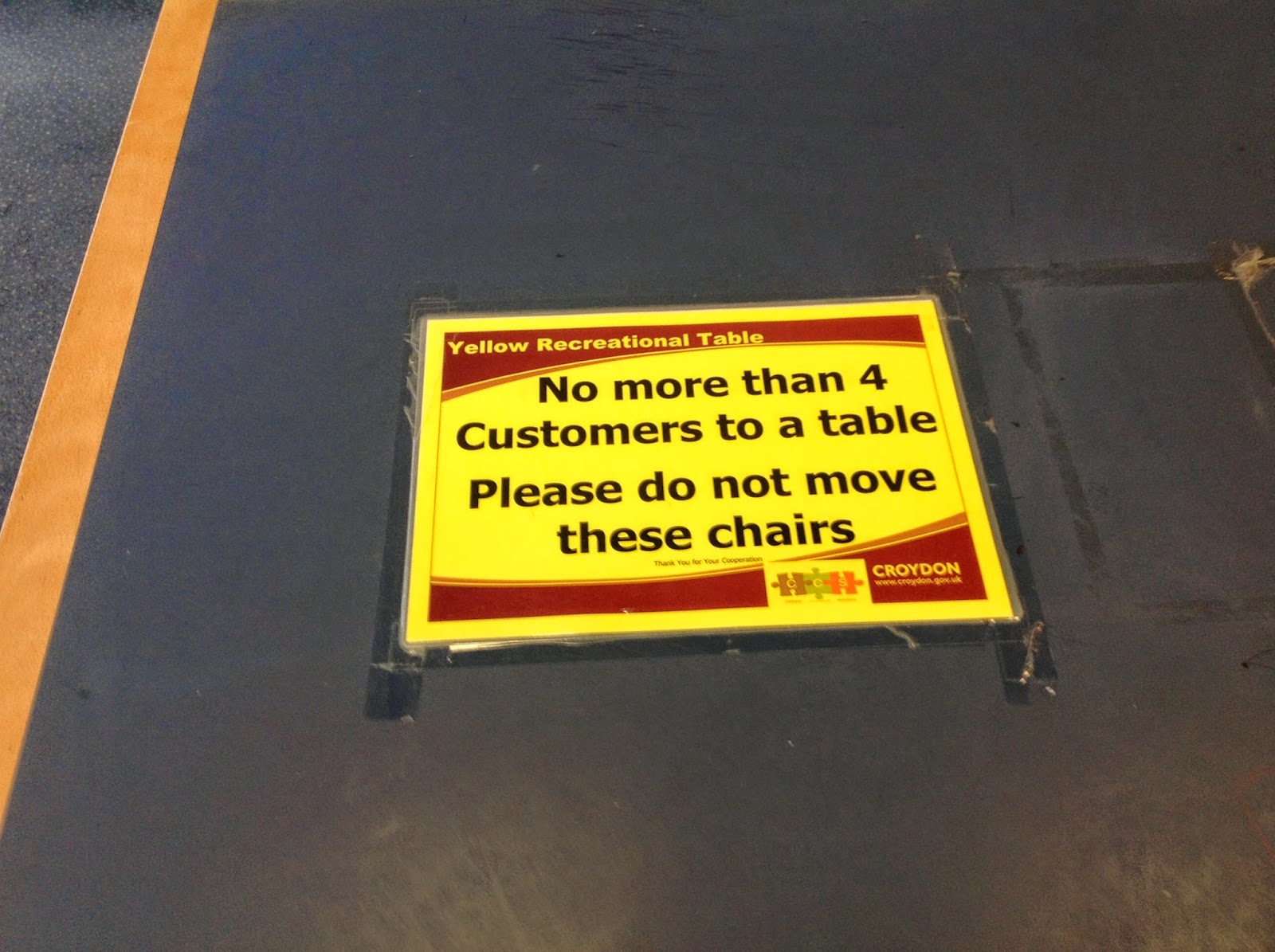 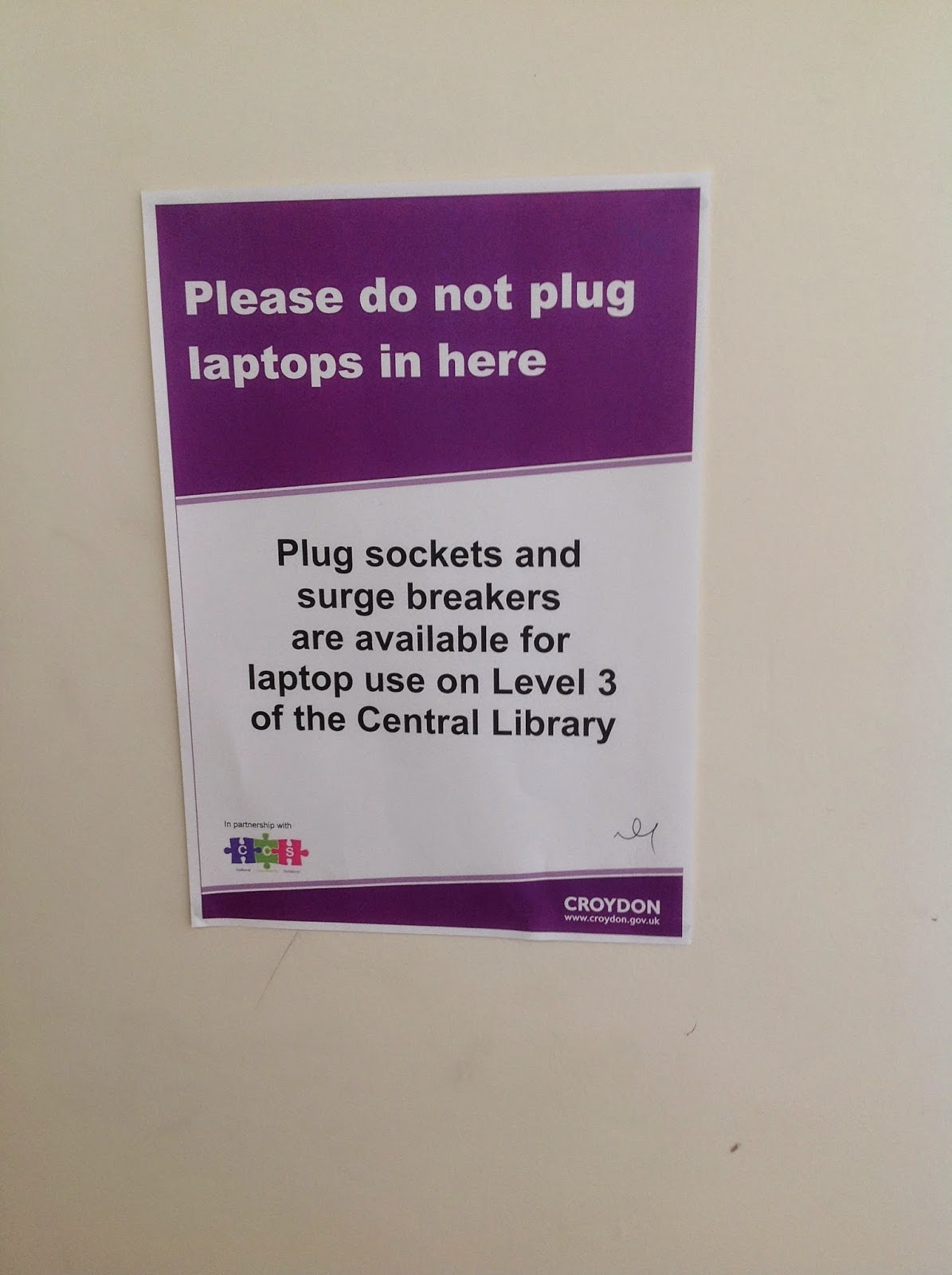 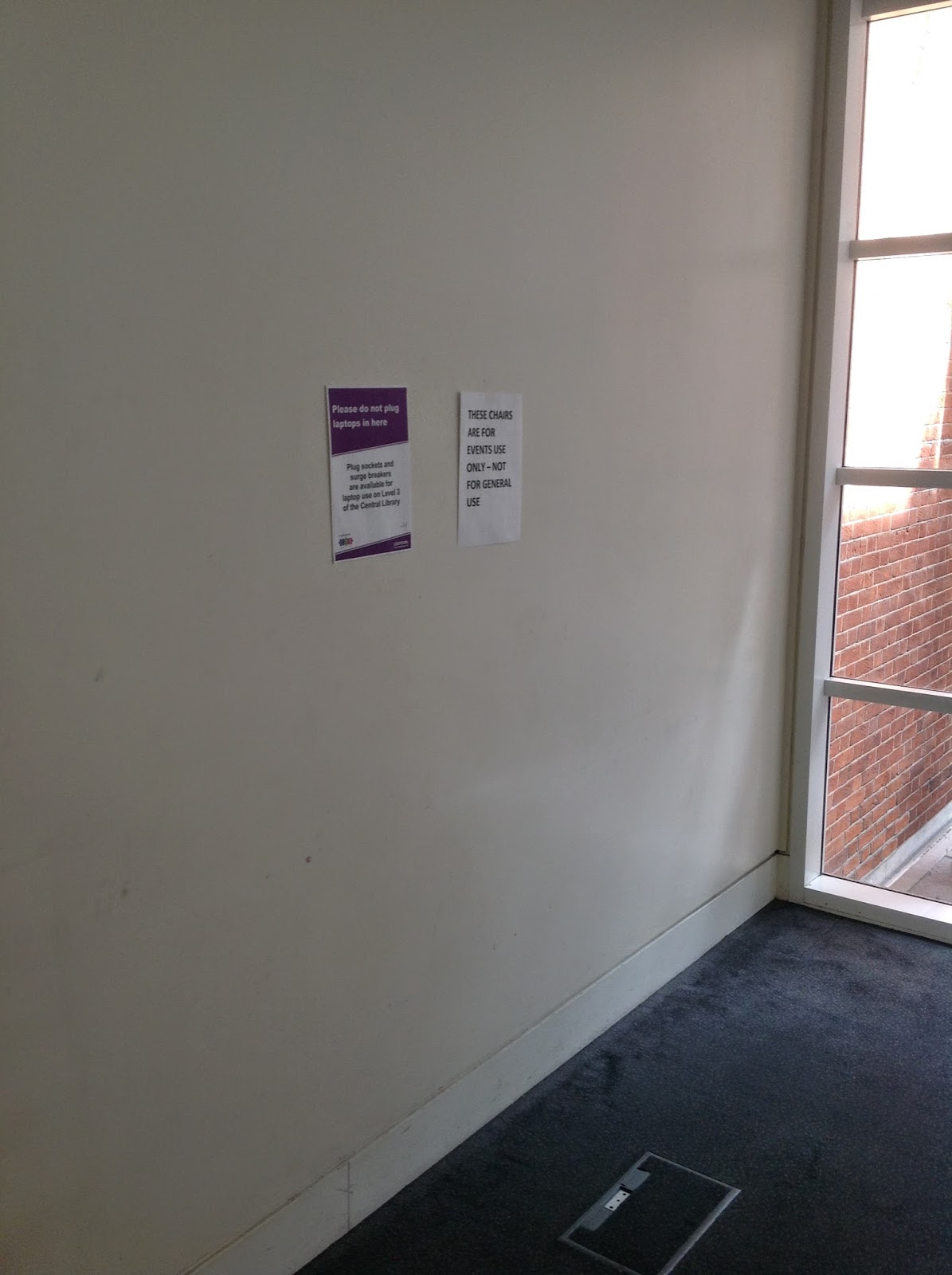 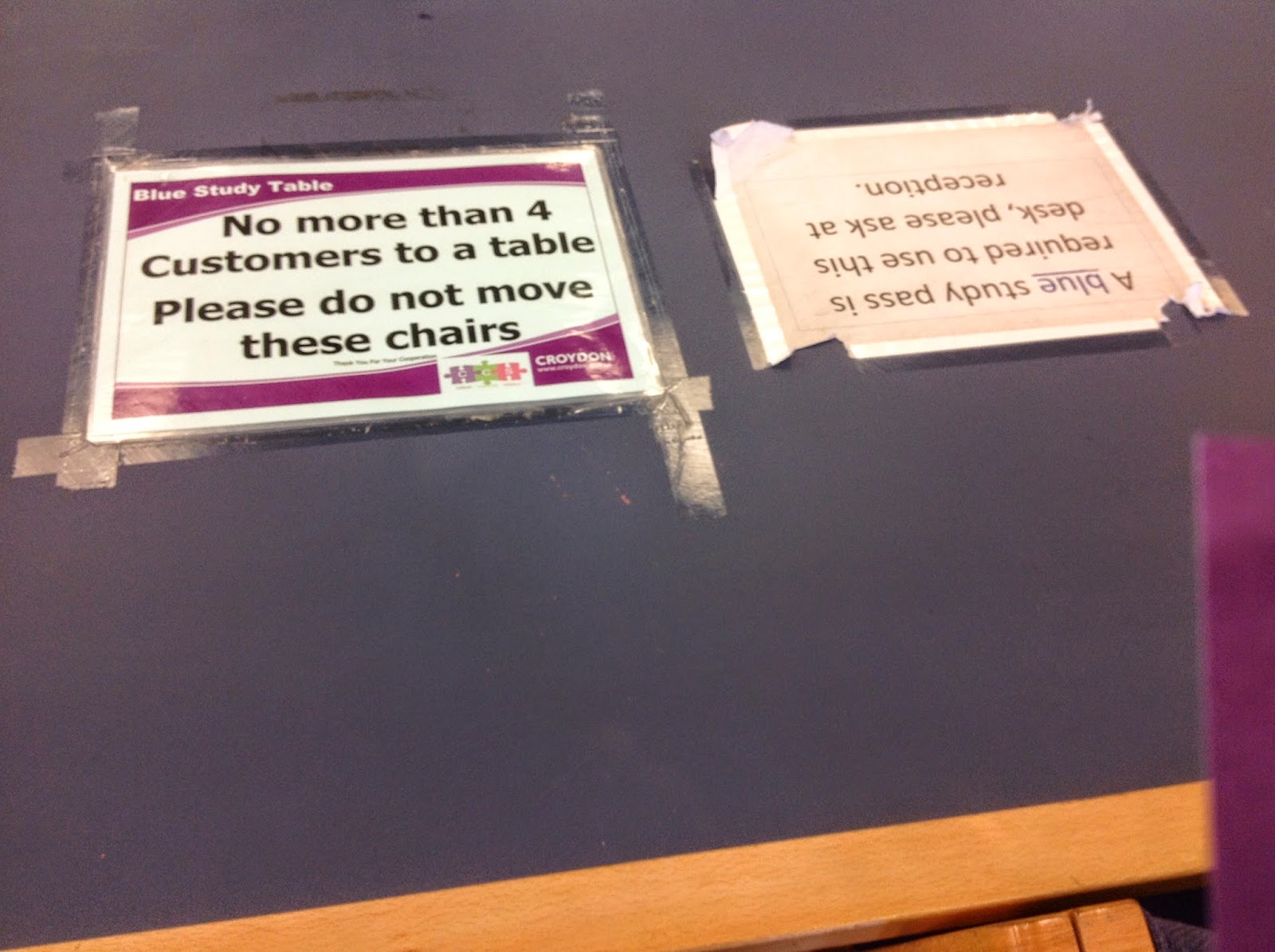 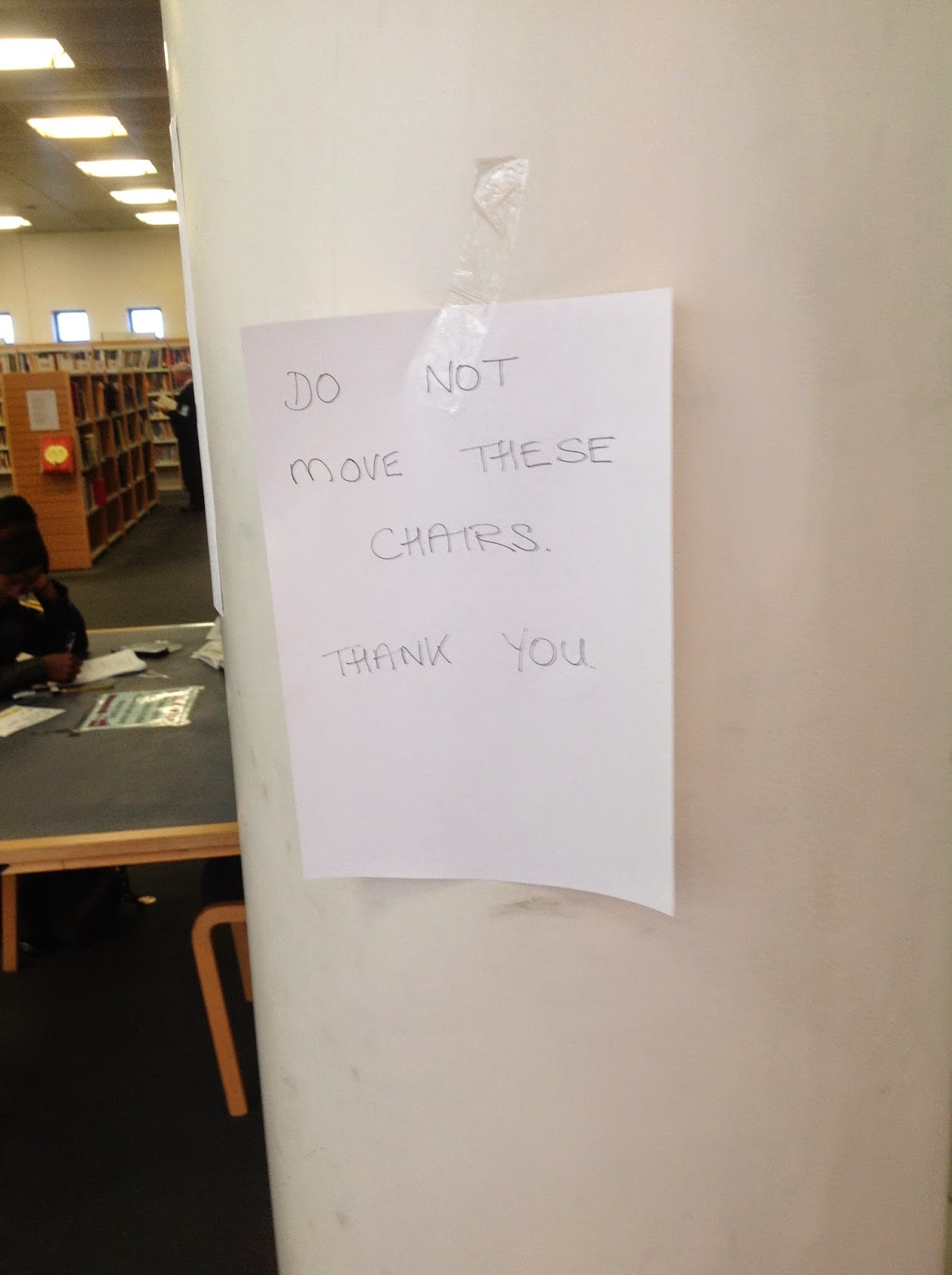 'Do not move these chairs' sign, by a pillar with no chairs. 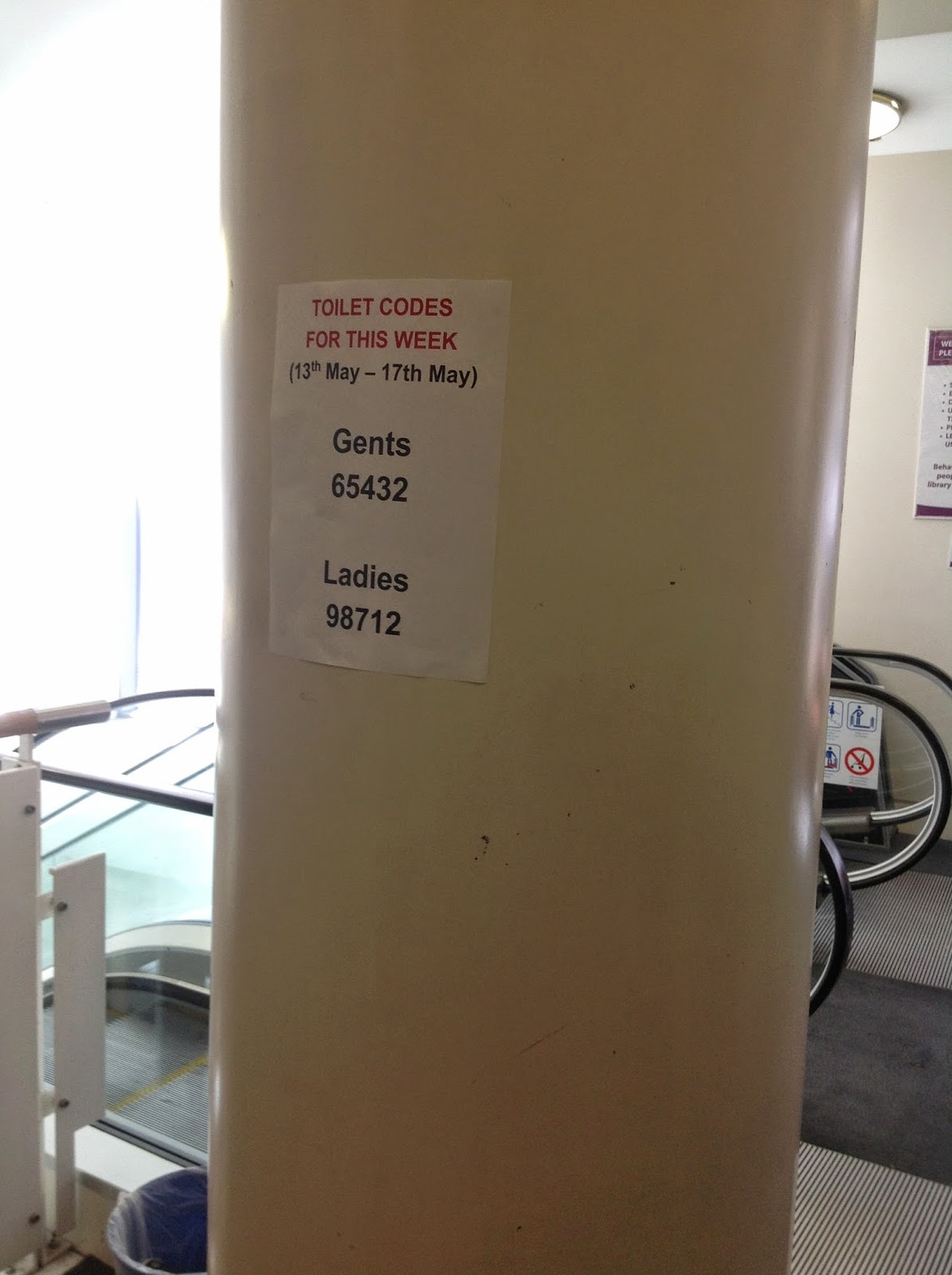 This sign, on an upper level,  is a significant addition. Previously a new system had been instigated. It was up to the library staff to provide the code for the public toilets to anyone who wanted to access them.  This includes library users as well as anyone else using the Clocktower building.

At least people using the library on this floor did not need to join the queue to request the code, as was the case previously.

Both the men's and the women's toilets were in a complete state on the second week we visited. Stocked with toilet tissue but sanitary bins in the women's facilities were overflowing, toilet paper strewn on the floor, the stench in both was overpowering. There is also a sign in both to advise that perfume and deodorant is not to be sprayed to avoid affecting people's allergies. Never mind the stench and unsanitary state they were in! 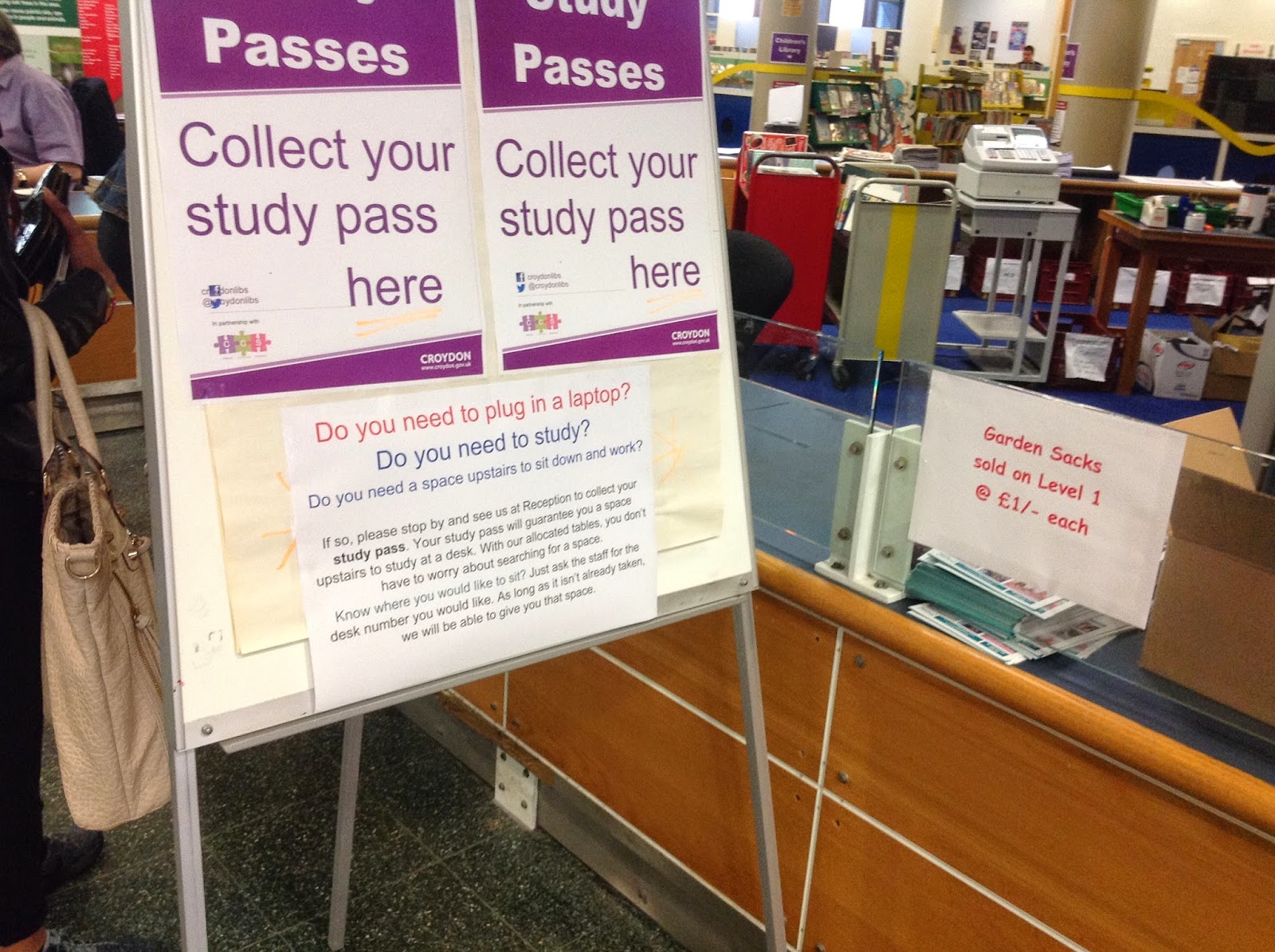 Study pass system still in place, but now with an explanatory note added underneath.


By the second and third week someone had been let loose with the black and yellow striped masking tape. It was everywhere, on both floor, fixings and on walls. 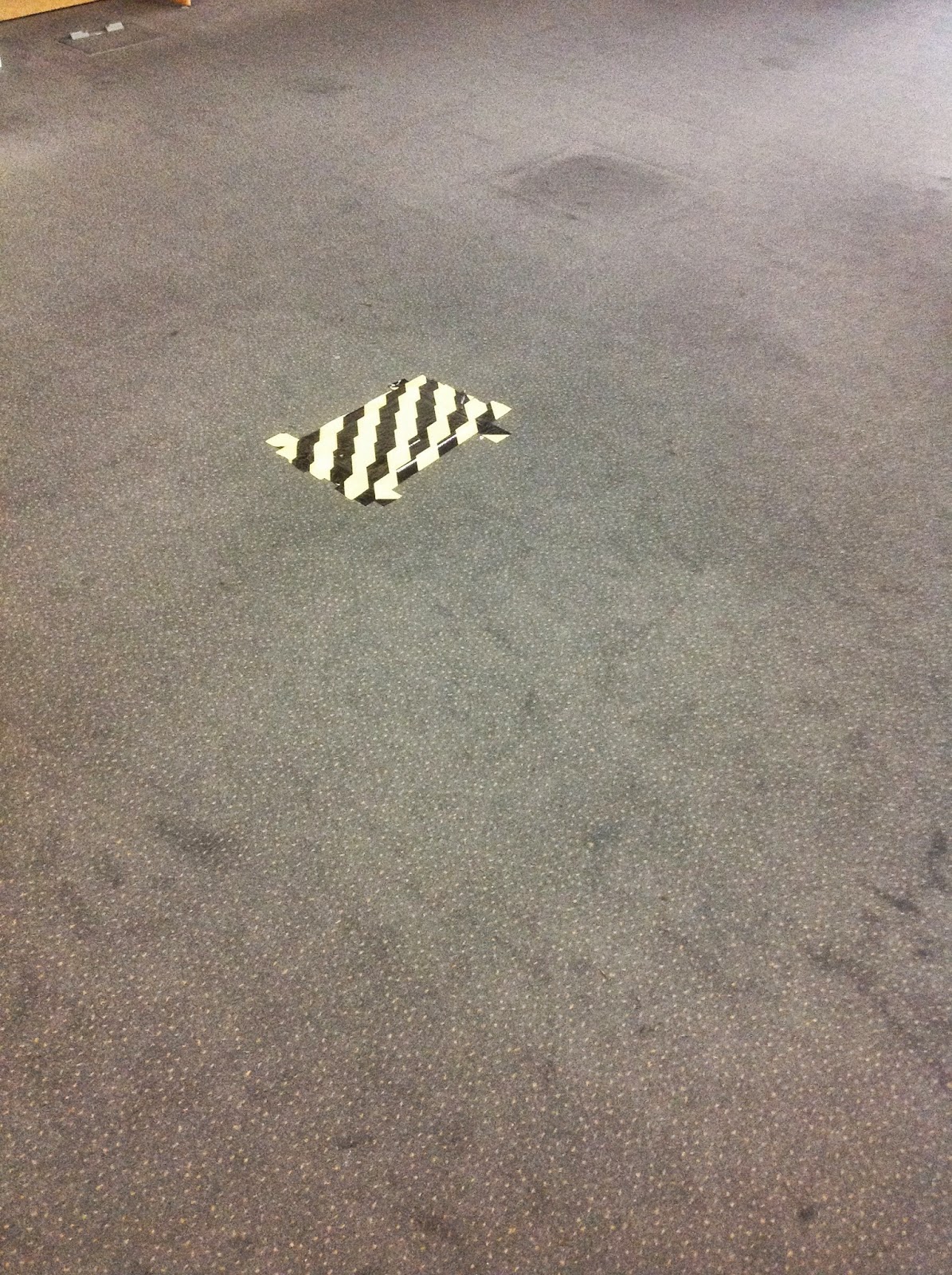 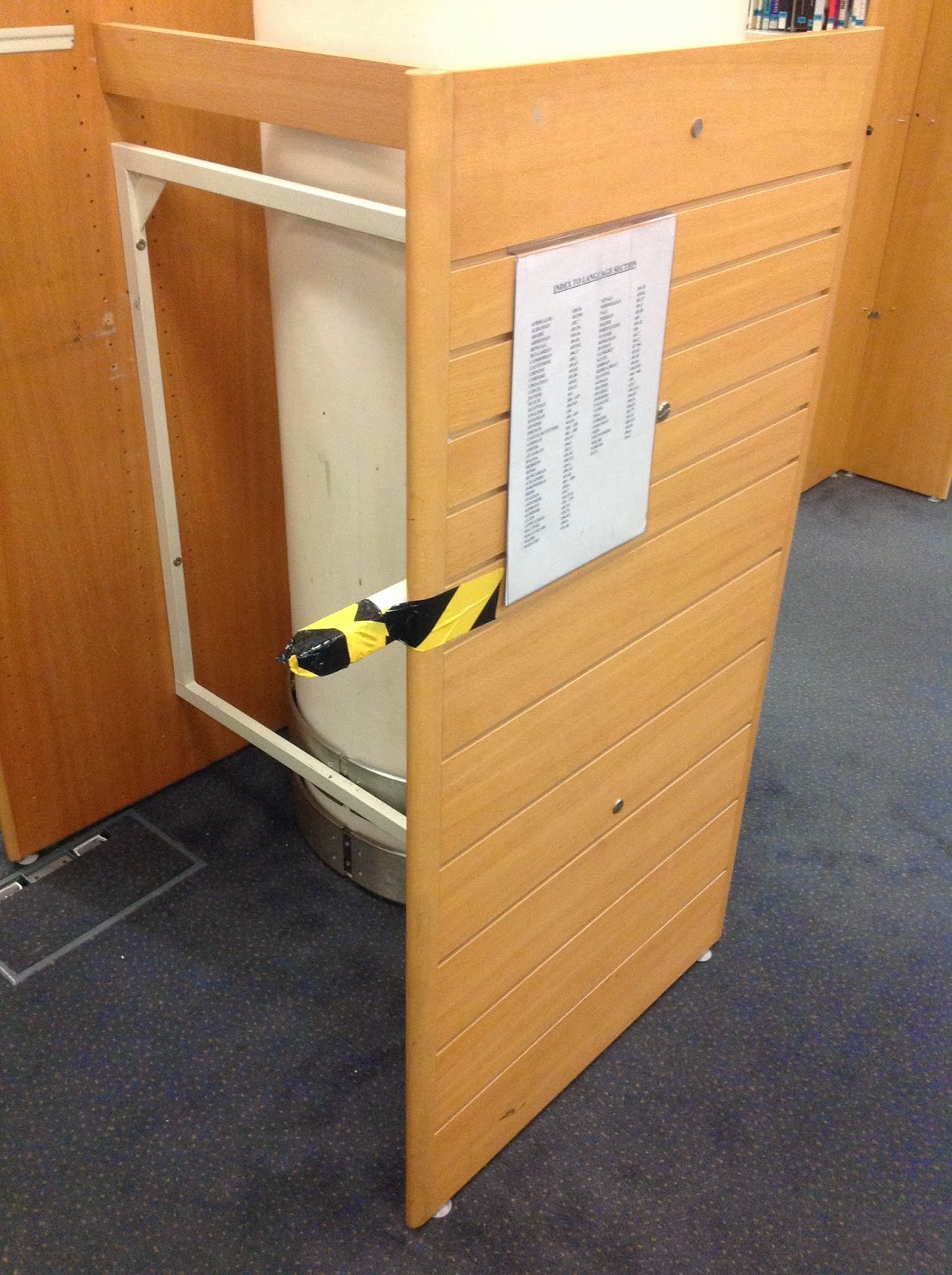 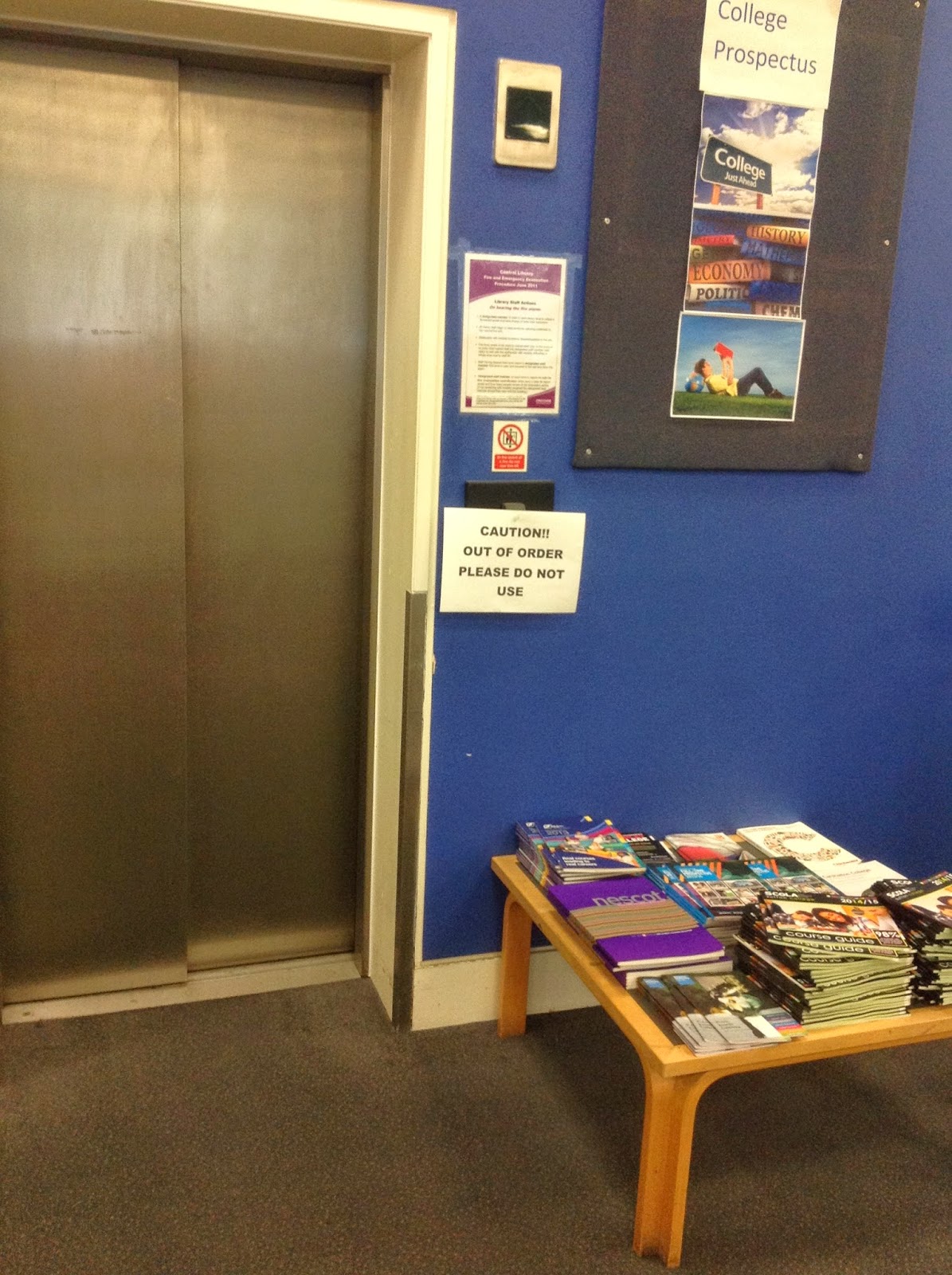 The escalator had been repaired on the second visit but the lift was still out of order last week.

New, long overdue IT, out of order

With a complete refresh of PCs promised as part of the deal struck with Laing, now Carillion, it seems hard to justify so many machines out of order.... 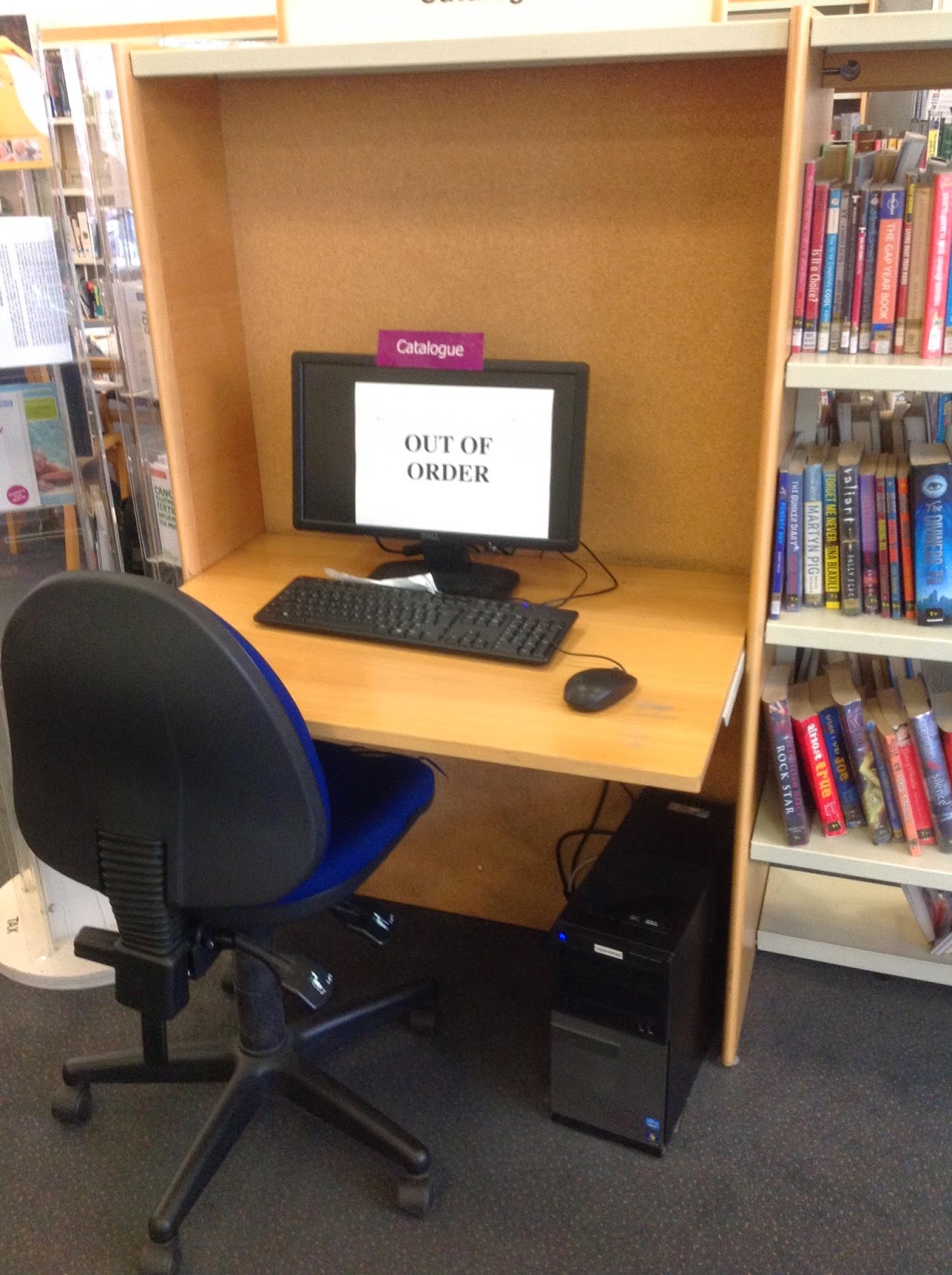 Displays were poor.  Shelves were untidy.  On the first visit, books on all floors were piled high, less so on subsequent visits, but nothing like how the library had been run prior to it being de-staffed and hand over to the builder's, Laing and now Carillion. 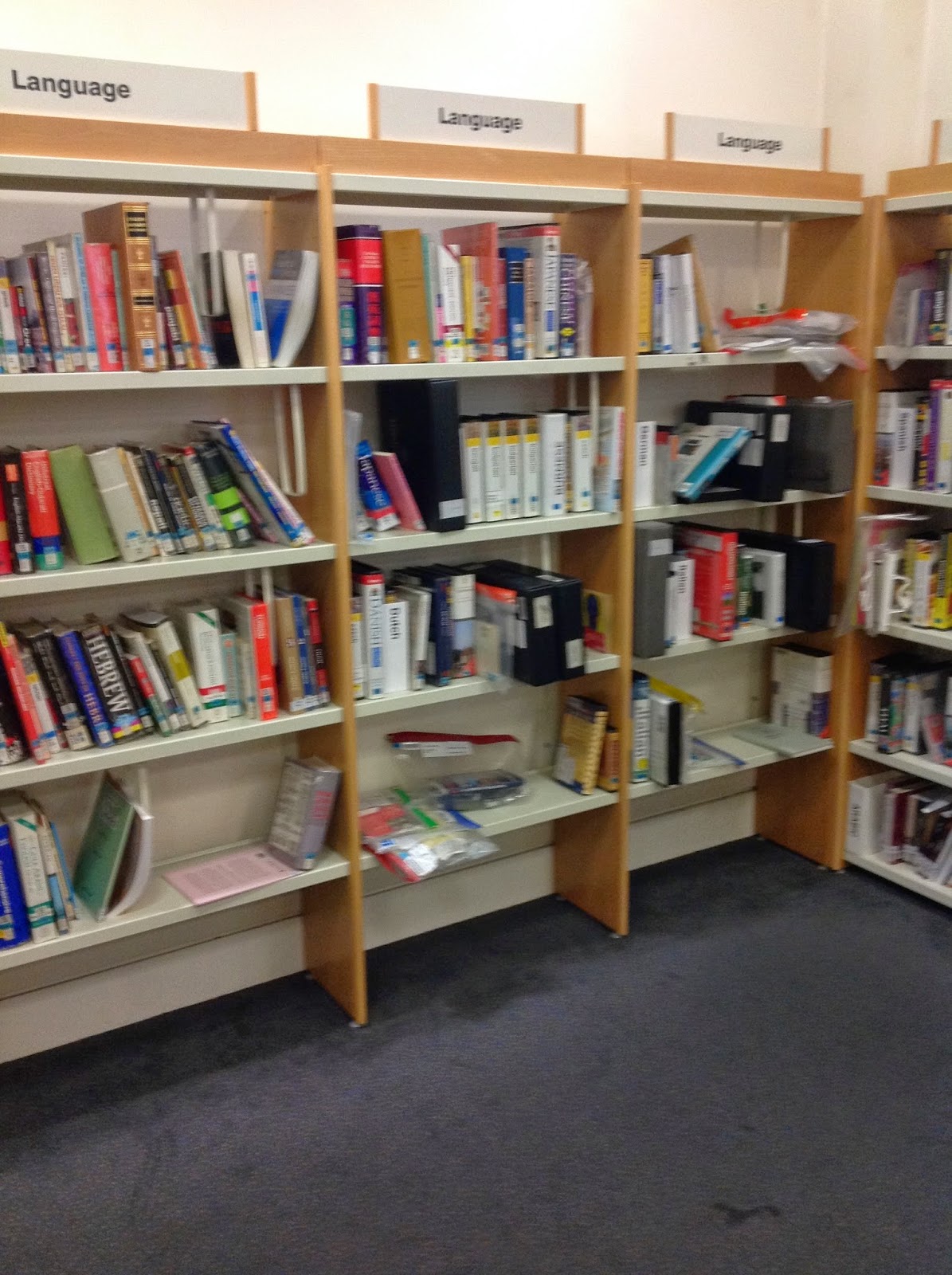 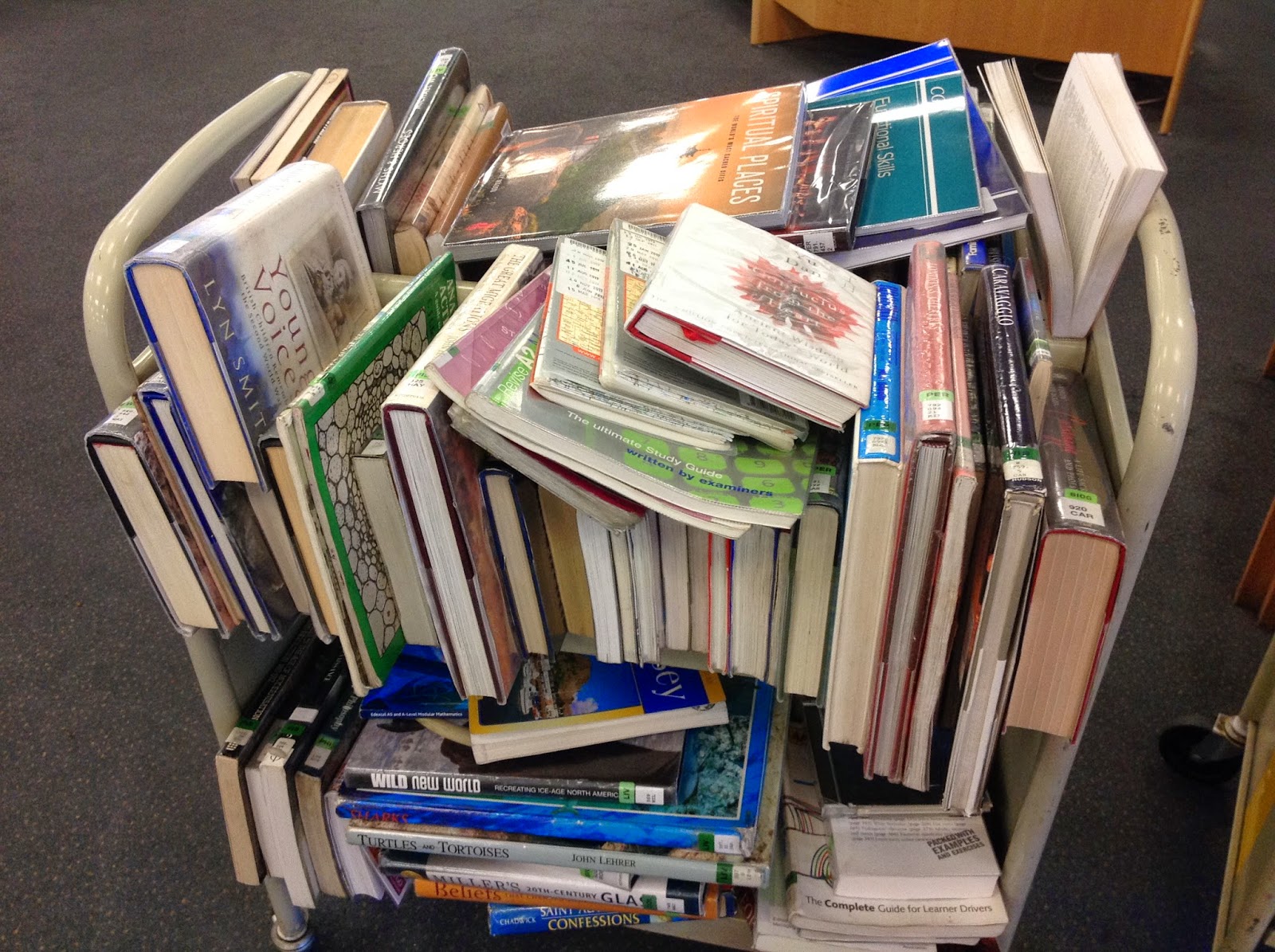 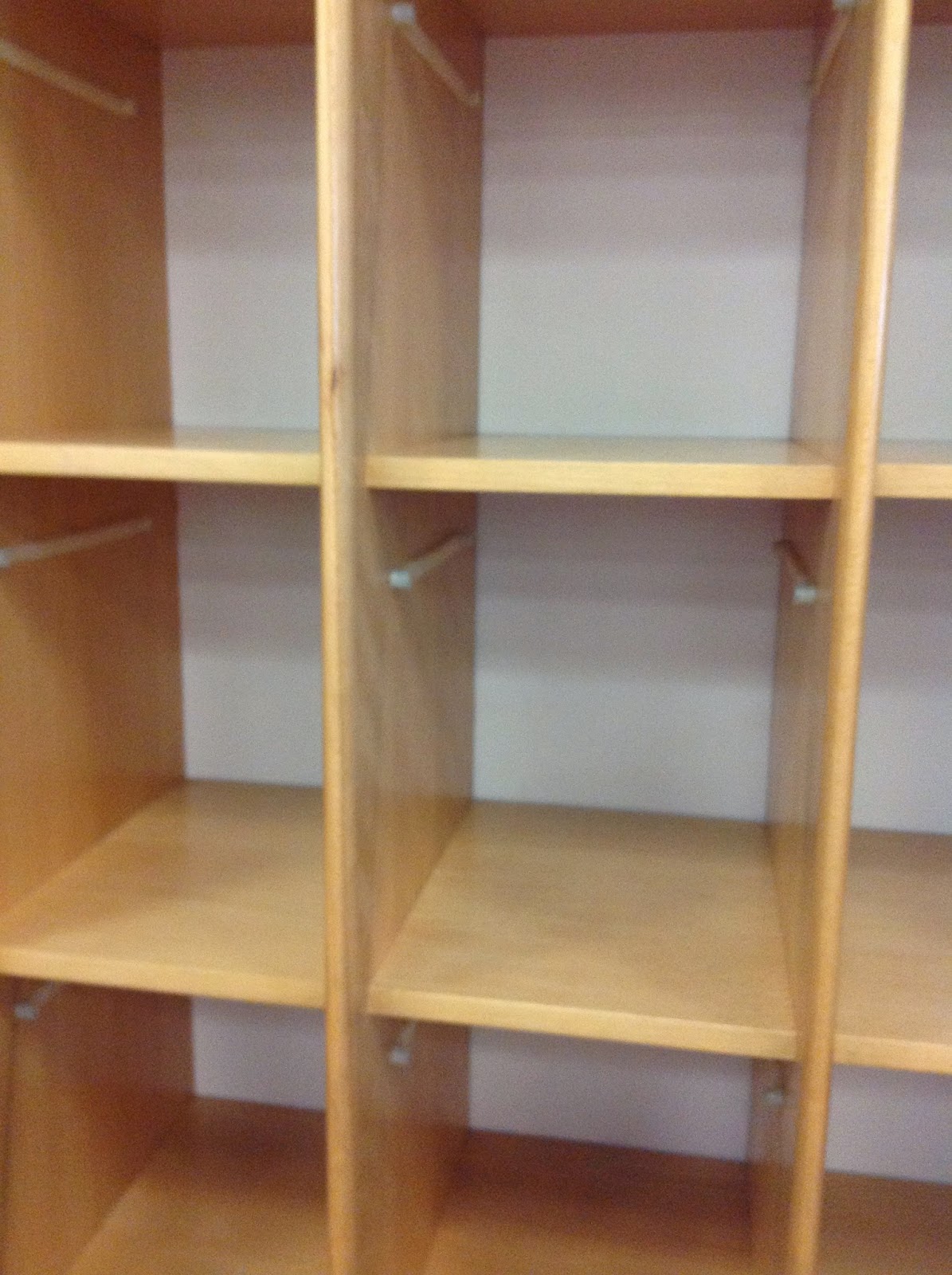 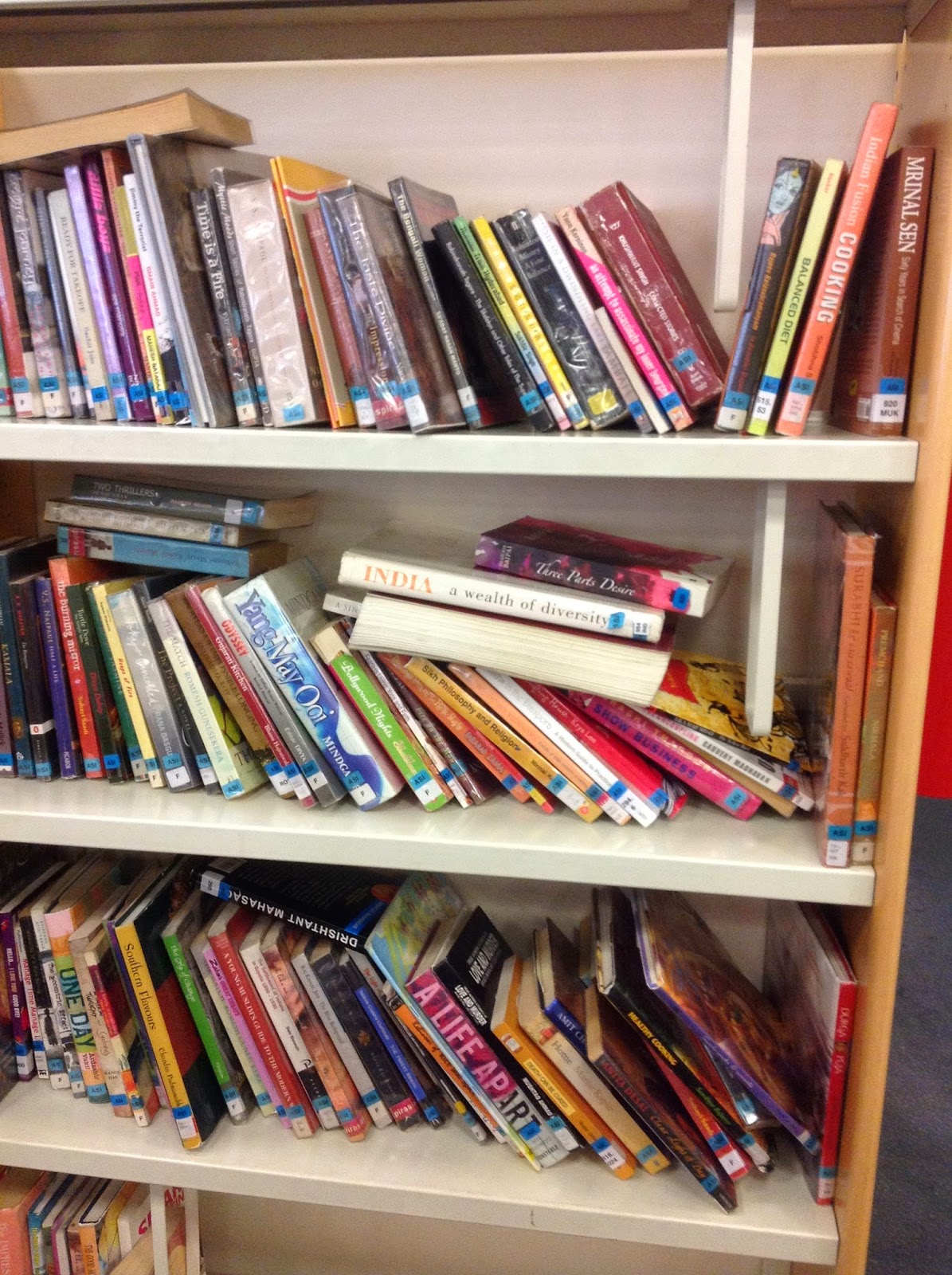 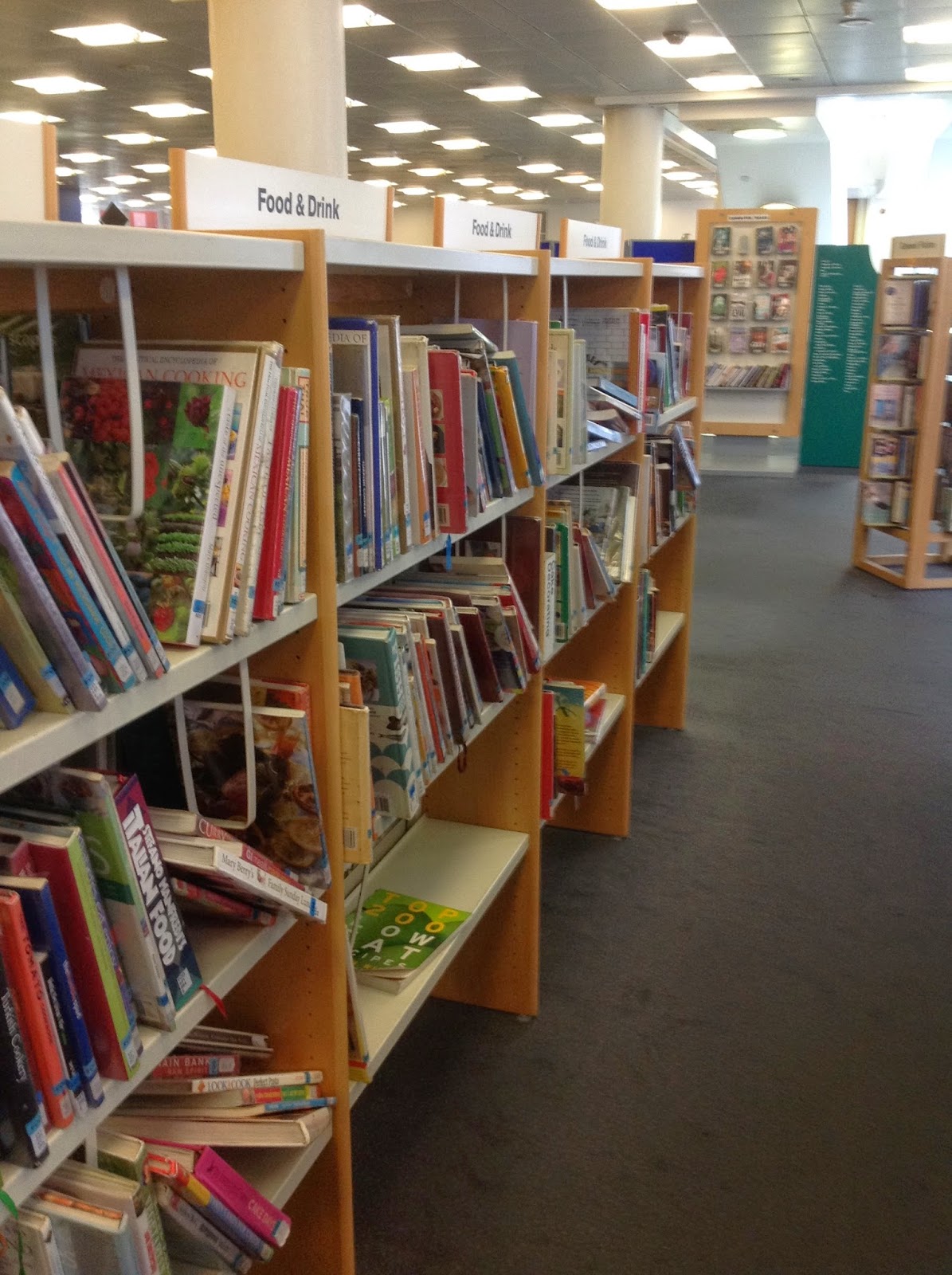 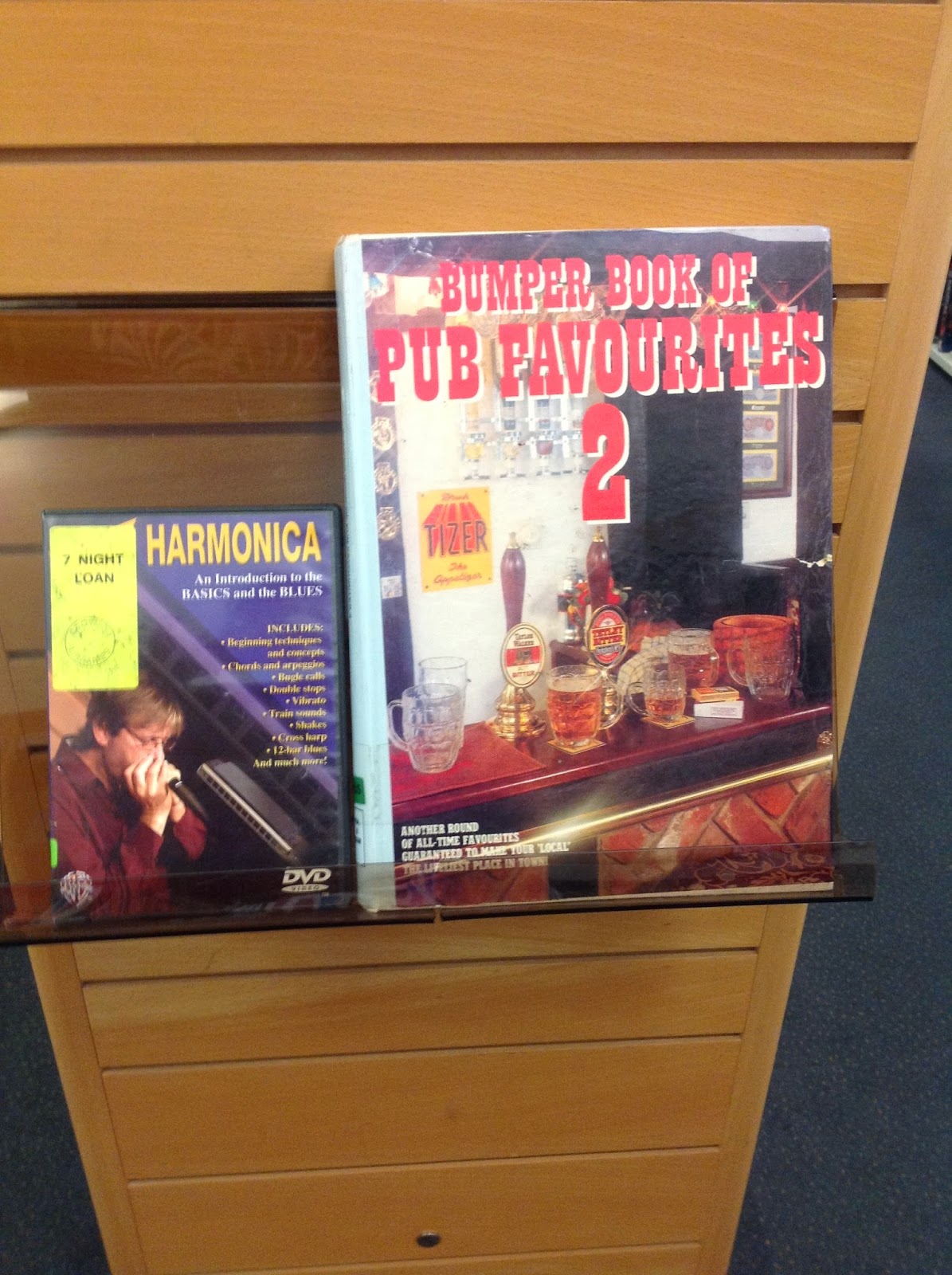 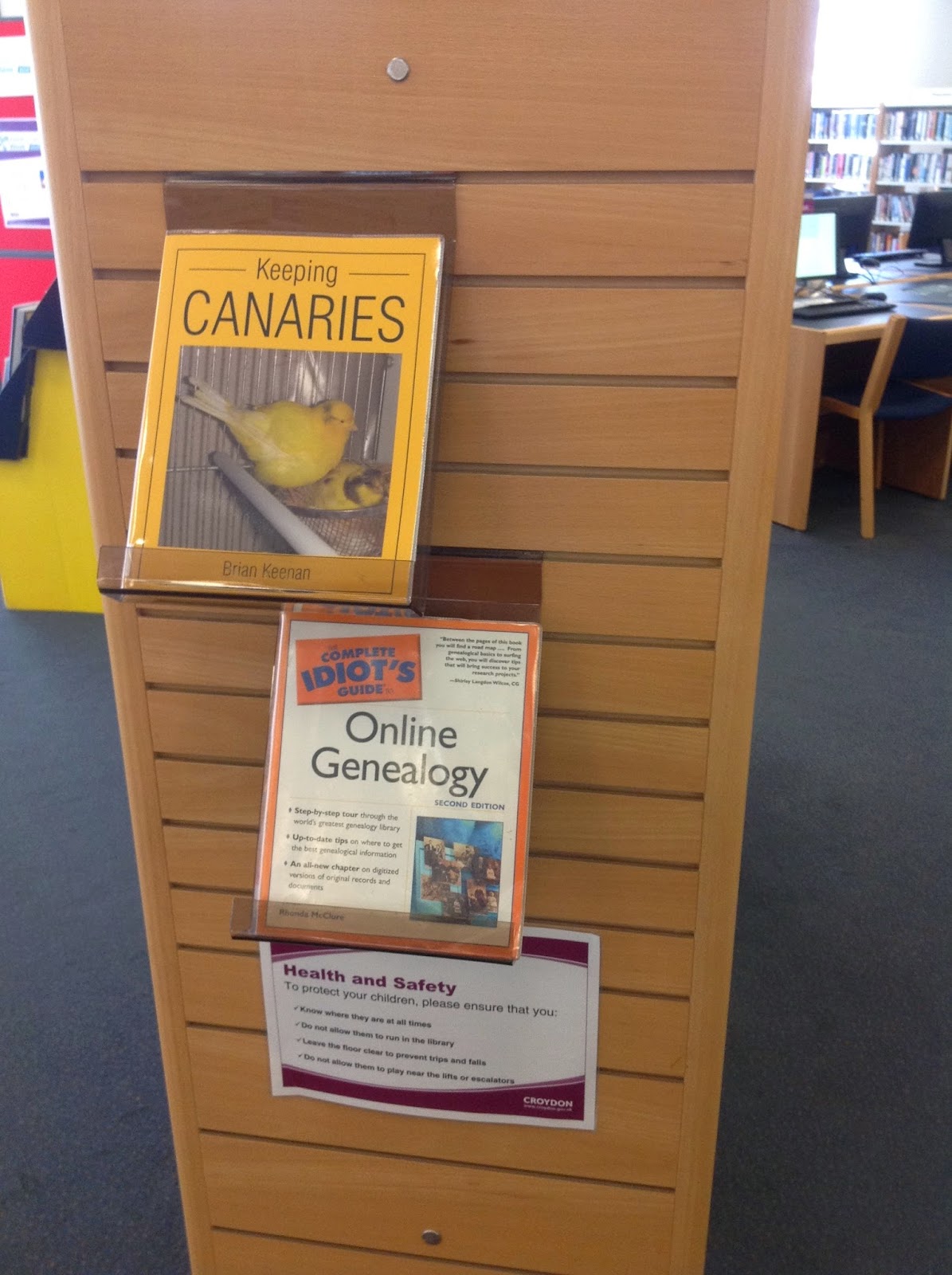 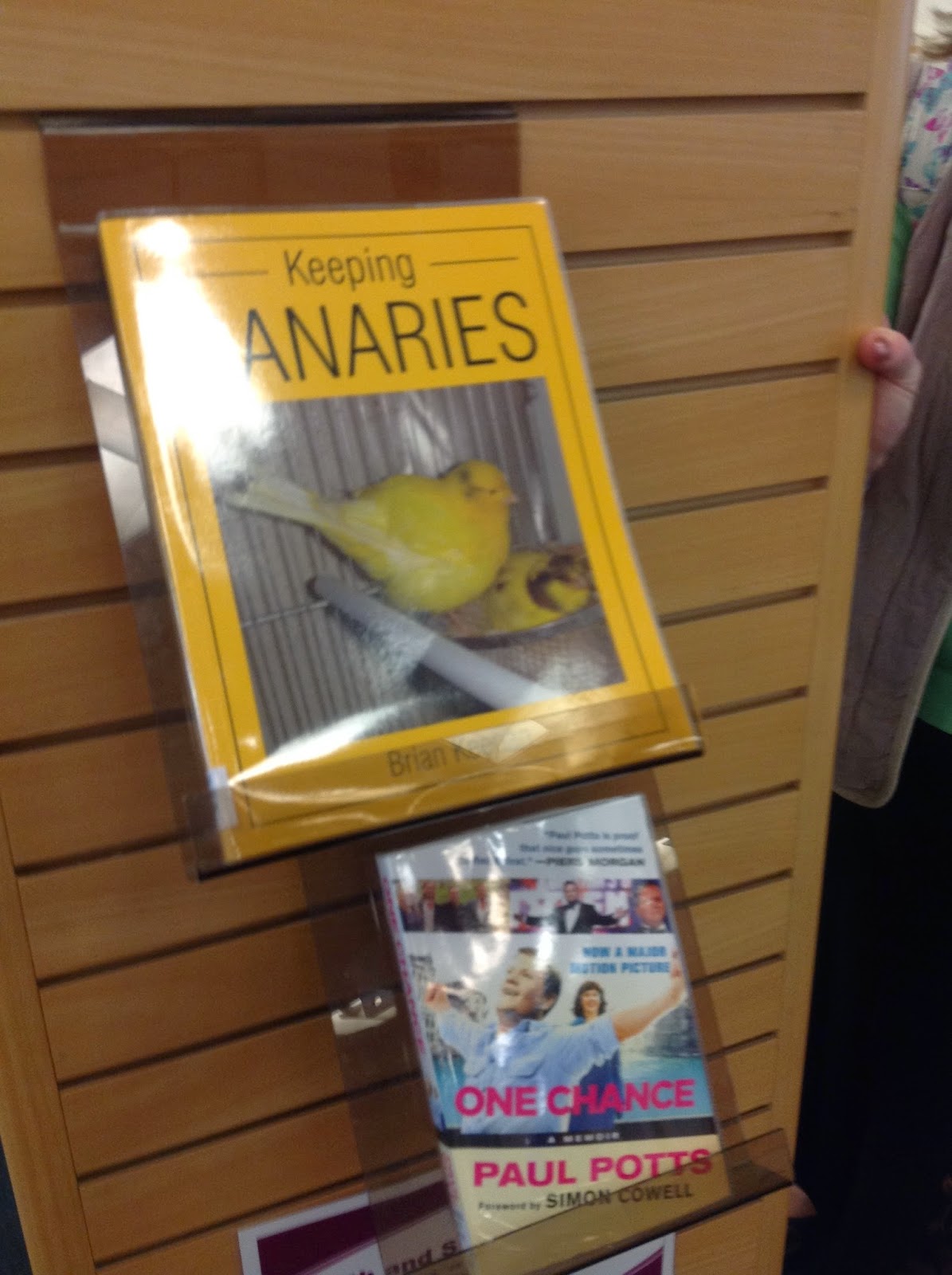 Very odd end of unit displays were created. Can you spot the theme? Harmonica DVD with the Bumper Book of Pub Favourites. The book 'Keeping Canaries' teamed with Paul Potts DVD, replaced with 'Idiot's Guide to Online Geneology' in subsequent weeks.

So what exactly are Croydon getting for their money?

And the big question now is will Croydon Council, now in Labour control, be able to reverse some of this damage?

Elizabeth
Posted by Save Croydon Libraries at 18:53