Why so shy, Cllr Pollard?

Cllr Tim Pollard is Croydon Conservative lead on libraries, along with an extensive portfolio including Children, Families and Learning.

He's slipping up, just like his predecessor, Cllr Sara Bashford, who bumbled her way through the sham consultations and then embarked on a procurement process to outsource Croydon libraries, without mandate. She was caught out making announcements throughout the process,  forgetting she wasn't supposed to announce the plan up front. Has Cllr Pollard suffering the same fate?

We reproduce below his statement, published in December 2012, presumably written before the call in of the decision to Scrutiny by not just the opposition but by both political parties.

We reproduce below the text in full from Cllr Pollard's glossy Step-Up document, the new version of Council Member Bulletins. At a time when services are being savagely cut and we face an increase in council tax it is unbelievable that Croydon could add more gloss to their publications.

This one was released in December 2012. You can view the glossy publication here.


"New library contract near to completion
Changes will start to be seen in Croydon libraries from next April, once a new organisation steps in to run the service.

John Laing Integrated Services Ltd has been agreed by the council as the preferred bidder to run library services, and details of their proposals should be released in the next few weeks.

The new contract guarantees that the council will retain the freehold of all its library buildings.
Current levels of service will not only be maintained, but, where possible, book stocks will be increased, facilities will be upgraded with (sic) and opportunities will be sought to access a greater range of public services from local libraries.

There will also be far more possibilities for making links with other organisations and businesses, with the potential to generate income or create training opportunities.

The library network will continue to look for more opportunities to involve members of the community and create links with the voluntary sector through friends groups, community events and social and learning activities."

Why is it that no details have been released, as promised?  The end of February 2013 is hardly a few weeks on from December 2013.

Is the delay due to legal wrangling? Have GLL challenged the decision? It seems clear that they were not fairly treated and offered best value to Wandsworth.

Are JLIS less than happy with the additional constraints placed on them by the scrutiny process?

And why are Conservative councillors, such as Maria Gatland, so ill-informed that, even having shown enough interest to call the decision into Scrutiny now can't quite muster the effort to ascertain and articulate the outcome? 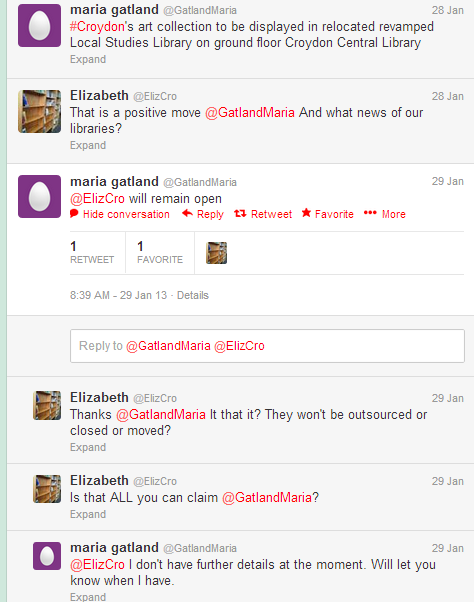 Not one of Cllr Gatland's colleagues has jumped in to help her out and nearly a month on @ElizCro is still waiting for her councillor to uncover the facts.

And does Cllr Pollard think residents will really be won over by claims of maintaining the current service?

Residents have noticed the huge loss of staff, decline in service and extensive book cull as our library service has been eroded since not long after the initial consultation occurred. And, Cllr Pollard, we'd love to know what libraries will be upgraded with as you fail to say. Dreaded self-service machines, no doubt.


Only a month away from the proposed hand over and  residents and councillors are still kept in the dark over the plans for our libraries.This is certainly giving all the appearances of either a deal that has gone terribly wrong or a deal that Croydon are none too proud of.

Is there anyone who has any real information? Get in touch.  We'd love to share!

Posted by Save Croydon Libraries at 14:00