A press release posted on Croydon Council's website today read, as follows. The spin  is breathtaking... We quote,

"The change to a community-run library service in Upper Norwood has moved a step closer with the completion of the transfer of library staff from Croydon's payroll to Lambeth's.

Lambeth will now take on responsibility for making the final arrangements to allow a community group to take over the library's day-to-day running.

Once the new arrangements are in place, it is anticipated that the library will be able to increase its opening hours, which were recently reduced to three days per week after several staff took voluntary redundancy.

Councillor Tim Pollard, cabinet member for children, families and learning, said: "I'm pleased that the money we have provided to the library, and the hard work of Croydon's HR and finance teams, has allowed the process to move on to the next stage.

"We were disappointed that the library's staff recently chose to reduce opening times. However, we're certain that once they've reorganised their rotas they will be able to open for at least four days per week.""

Anyone like to remind Cllr Tim Pollard that it the withdrawal of funding by Croydon that has resulted in these redundancies and drastic cuts to opening hours before the Trust is even in place? 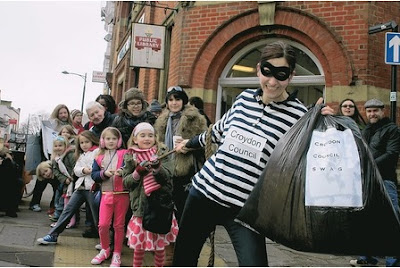 Posted by Save Croydon Libraries at 20:51